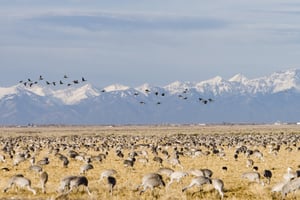 Each spring, a huge gathering begins in the meadows surrounding Nebraska’s placid North Platte River.  Gangly creatures in gray coats stride about on skinny legs. Some are already paired up with members of the opposite sex. Others are on the prowl.  Voices are loud and personal waste accumulates in the muck left by the melting snows.  Eating, resting, preening and dancing consume the days. The choreography is impressive, with courteous bowing, synchronized movements and theatrical jumps. Red, bumpy-skinned faces get redder as the energy increases and the competition for the attention of potential partners intensifies. By the end of their sojourn here, only the youngest members of the group will not be hooked up.

Woodstock on the Platte? Not quite. This stretch of Nebraska is a staging ground for the annual migration of half a million sandhill cranes from their southern wintering to northern breeding grounds. In evolutionary terms, sandhill cranes are a terminal branch on the family tree, soldiering on in their original form which appears in 2.5 million year-old fossil records in Florida.  These birds are reminders that, 200 million years ago, some dinosaurs gradually turned their scales into feathers and took to the air. On land, with wings folded, torsos balanced on leathery scaled legs and clawed feet and skinny heads rising from reptilian, s-curved necks, cranes are thin, graceful, feathered, beaked and toothless versions of the velociraptors in Steven Spielberg’s Jurassic Park.

Devoted birders approach sandhill cranes with the same reverence that prompted prehistoric man to paint crane shapes on his cave walls and the Egyptians and Greeks to memorialize cranes in symbols and poetry.  Congregations of crane watchers appear on the Platte each spring, awaiting magical moments in the wee hours of the morning when thousands of trumpeting, rattling and croaking birds become airborne.   As if responding to a conductor, the 3-4 ft. tall birds run a few steps and then set the misty morning air vibrating with their wing beats, energetic upward snaps and powerful downward thrusts that propel the birds into a rising spiral until they reach the thermal currents where they stretch out and glide.

On some days the cranes simply head off to nearby fields to glean leftover corn, along with whatever tubers, berries, worms, snails and small rodents they come across. But eventually the flock lifts off and keeps flying, as many as several hundred miles at a time.  The birds ride the thermals when they can, or flap away in a V-formation.  Eventually they arrive at their chosen summer homes, remote marshes where monogamous pairs build big, sloppy platform nests surrounded by moats of water. After much dancing and calling in unison, the couples eventually get down to business and produce two eggs per pair, the goal of the entire migration exercise.

While sandhill cranes are not a threatened species, their reproductive rates are low. Only one of those eggs is likely to produce a bird that makes the trip back south at the end of the summer. It will exchange its tawny chick down for gray feathers tipped in black pigment that stiffens them for long flight. Its red skinned face will sport sparse bristly hairs long before the youngster considers reproduction, sometime between ages two and seven. With luck it will escape hunters’ guns and windmill blades, survive migrations for over 20 years and continue to find suitable foraging and breeding grounds. The enormous wetlands it prefers for meeting, mating and breeding have been carved into smaller patches, many too close to man for comfort. But since fields of grain provide abundant food, it will learn to compromise.

Where To See Sandhill Cranes in Colorado

We who live in Colorado do not have to trek across I-80 to Alma, Nebraska to see sandhill cranes. Though most of the birds migrate from wintering grounds in Texas and northern Mexico all the way to the Great Lakes, Canada and beyond, a few groups settle into breeding grounds high in the Rocky Mountains. One group is close by, in the Yampa River valley near Steamboat Springs. There they not only find preserved wetlands, but also a small army of devotees who beat back a 2012 attempt to license sandhill crane shooting in Colorado.   Last year, these crane groupies also put on the state’s first crane festival, a huge success that promises to be even more this year.  The 2nd Annual  Yampa Valley Crane Festival in Steamboat Springs and Hayden spans Sept. 5-9, 2013 and includes daily crane viewings, expert speakers, films, art exhibits, workshops, family activities and more (even  an evening sipping wine and learning how to paint a crane).  visit  www.coloradocranes.org  for schedule.