Believing the Benefits of Birdsong

Have you ever stopped to think of the importance of birdsong? 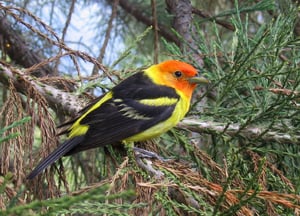 Humans are cued in to bird calls more than you might realize. We know that when we hear a chorus of birdsong as we hike, we are relatively safe. When the birds go quiet, we inherently know to be suspicious of our surroundings, predators, or impending weather. They are also historically our alarm clock, naturally alerting us to be more physically and mentally awake. Although we are able to identify individual bird calls by patterns of rhythm, tone, and pitch; a soundscape of birdsong often sounds like a chaotic collection of trills, whistles and noises, without an overall repetition. With no repeating pattern to focus on, birdsongs mask other background noise, and it doesn’t get stuck in your head or lull you to sleep.

Birdsong and other natural sounds have been found by scientists to be physically relaxing, but cognitively stimulating, for humans. Using this idea, there are certain institutions such as banks, schools, and hospitals that have started playing birdsongs and natural noises as background noise, with positive results. Patients reported feeling less stressed during treatments, students were more aware and focused during the after lunch lull, and customers showed an increase in satisfaction while doing business where these sounds played.

Knowing the benefits of bird song, next time you are outside, whether in your backyard, on the ski hill, or out walking your dog, stop and try to tune in to the bird calls in the background. Many birds are identified only by their song during bird counts and by ornithologists in the field. You can hear the diversity of birds around you, and by practicing a few tips for identifying calls, you can clue in to what species are close.

When practicing bird call identification, it is best to learn from an expert in the field, but due to the availability of special applications and programs, many of us have “an expert” right at our fingertips: our smartphones. Using available programs, such as iBird Pro or Audubon, helps us because we can see a picture of the bird and listen to their call at the same time. If possible, practicing this in the field will help you identify and then find the bird you are hearing, helping you remember both physical markings and the actual call. Putting your own words to the birdsong, as well as making up new or using existing mnemonics, will help you remember calls too.

While out, one of the many birds you’ll hear this spring is the chickadee, which makes a sound that mimics its name, “Chick-a-dee-dee, dee.” But, if you hear a repeating, loud, “Wicka, wicka, wicka,” you might look up in time to see a flash of orange underneath the wings and tail of a Northern Flicker. Or if you are out at night and you hear an accelerating series of low whistles that sound as if a ball is bouncing to a stop, you might be near a Western Screech-Owl.

Birds call for a variety of reasons, to find mates, communicate danger, share a discovery of food, or to give directions. Whether you are practicing your bird identification and looking for that new life list species or just trying to tune into the natural world around you, picking up on these sounds can open the door to a whole new world.

Author, Rose Delles is the Youth Programs Coordinator at Walking Mountains. Her favorite birdsong is from the Canyon Wren, whose call is described by the Peterson Field Guides of Western Birds as, “A gushing cadence of clear, curved notes tripping down the scale, sometimes picking up at the end.”