A Robin Revolution in Vail Colorado! 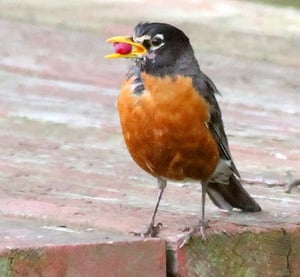 If you’ve noticed a lot of robins around this winter, you’re not alone. Journey North, an online network where citizen scientists report bird activity, has had more than 400 reports of unusual robin activity just this past January. Locally, we’ve also had numerous reports of robins raising havoc and they have been observed down in the towns and valleys during some of our warmer spells. So what’s going on? Are the robins preparing to launch a revolution? Are they coming to take over a feeder near you?

But while the idea of a robin revolution might be fun fodder for a Hollywood movie, it’s probably not what the robins have in mind. The robins are just doing what robins do, which is mostly to look for food. And when the temperature warms up, even slightly, food that was formerly frozen suddenly becomes available. Robins active in the middle of Avon in December are probably finding a feast of insects and other assorted crumbs left out.

We think of robins as the harbingers of spring, disappearing when the snow flies and then showing up in early April or May to start spring off with a song. But in fact, many robins don’t migrate at all. Their habits just change so substantially that we just don’t see them in the winter. Individual populations of robins will spend the whole year near their breeding grounds, changing their diet from a summertime feast of earthworms and small invertebrates to a winter staple of berries and other leftover fruits. This change in diet is also why you don’t see robins out in the winter. During the summer, they are diligently scouring your lawn for juicy worms and slow grasshoppers; but in the winter, they spend their time in the trees, roosting for warmth or foraging for fruits.  One interesting study even suggested that wintering robins selectively choose fruits with insects in them in order to supplement their diet of fruit.

Experts also theorize that urbanization has largely helped robins, and some birds may choose not to migrate because of the increased presence of fruit trees in urban and suburban landscapes. Urbanization also increases the average local temperatures, and of course, we can’t forget the yummy crumbs we humans drop. There are downsides too, like our lovable housecats and car mirrors, which can confuse robins and leave them posturing against themselves to defend a territory. Kind of like the boys out on Bridge Street on a Friday night …

But with all of this basic life history aside, there is another factor that the literature cites often as a factor in changes in bird behavior and life histories. I hate to say it, but I must, because any discussion of changes in bird phenology (the timing of life cycle events) needs to be accompanied by the acknowledgement of global climate change. Studies are showing that birds are leaving their southern wintering regions earlier, only to arrive at summer breeding grounds that are still covered in snow. This is only one of the challenges confronting our feathered friends and it’s certainly possible that changes related to this phenomenon might also be impacting our local robin populations in ways that even they might not understand.

So whether you are an experienced birder with a life list or simply an average Joe who just enjoys watching the magpies and the crows battle it out, there is a way you can contribute to help scientists better understand the robins and their feathered friends. There are several phenology networks online that are dedicated solely to observations of birds. Check out ebird, FeederWatch, or Journey North for starters. Both organizations collect sightings from citizens around the world (like you) and make the information available. Knowledge is power and these networks are creating powerful resources to help us better understand our world.

Author, Jaymee Squires, is the Director of Graduate Programs at Walking Mountains Science Center. She is an avid birdwatcher and always interested to hear more stories of robins behaving badly!  Connect with Jaymee at Jaymees@walkingmountains.org