Reintroduction of the Canada Goose 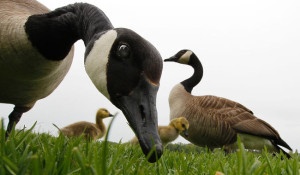 HONK HONK HONK!
Is it a car? Is it a bus? Nope, it’s just the famous horn of the Canada Goose. This familiar loud honk may be considered just as annoying as that of any automobile, but it should in fact be celebrated, for it is the voice of a survivor! Yes, this black necked white chin-strapped beast of a bird was nearly driven to its demise by humans in the 1920s.

Unbeknownst to many, the Giant Canada Goose was near extinction during the early 1900s as a result of unregulated hunting, egg collecting, and habitat destruction. Many thought it had been gone for over 30 years, but a surveyor discovered a small remaining population in Minnesota in the early 1960s. The first recovery efforts started by reintroducing wild geese into South Dakota’s Sand Lake National Wildlife Refuge and Shadehill Reservoir. Captive-rearing of young, along with a program releasing and transplanting birds, was initiated at the Northern Prairie Wildlife Research Center and the Audubon Refuge in North Dakota. Programs to reestablish the population were so successful that now nearly 3 million are estimated nationwide. Thanks to the efforts of many private and federal organizations, the largest goose in the world has made an outstanding comeback.

The Giant Canada Goose now reverberates a collective honk of happiness! From manicured lawns, to parks and golf courses, these birds have benefited greatly from their willingness to encroach on urban lands. Manmade changes to the environment have actually been kind to this bird, by providing more fresh green grass and shrubby grub. Some life history characteristics that have helped this bird include their ability to reach sexual maturity at an early age, large clutch sizes, high nest success, and high survival rates. Their incredible population growth may also be attributed to their strong family bonds and abnormal migration. Mating for life and staying together year round are just the norm for this goose. Additionally, some of these giants are known as “residents”, remaining in temperate regions year round where weather doesn’t force them out. Others however, will migrate south in winter to escape extreme cold and deep snow if necessary.

The environmental conditions and life history characteristics combined have made this goose a common sight throughout North America. So, the question is, why isn’t anyone jumping with joy over this great success story? The answer lies in the fact that many people pinhole the negative impacts of this bird and overlook the many positive impacts. For example, we take for granted the pure aesthetic value these gentle giants provide at parks and open areas, where their presence alone adds to the overall beauty of a place. Recreational bird watchers often find joy in watching these creatures, and it’s hard to ignore the beauty and precise symmetry of those fluid flying V-formations. Even economically speaking, these birds have helped boost migratory bird hunting and funds generated towards the sport. In the 1980s, only about 15% of the waterfowl harvested in The Mississippi Flyway were Giant Canada Geese. In 2010 this proportion shot up, literally, to about 70%. Yes! These water birds unknowingly benefit us in many ways.

The tremendous turnaround the giant Canada Goose has made is shocking and sometimes obscured by their current overpopulation. Humans were the cause of the near extinction of this beautiful bird, but ironically, we were also the cause of their reestablishment. Take a moment to think about this small fact and how big of an impact our decisions today have on our future generations. We do make a difference.

Morgan Ballinger is a Naturalist at Walking Mountains Science Center in Avon who loves all things wild and weird about our natural world.