Northern Flicker: An Exception to the Rule 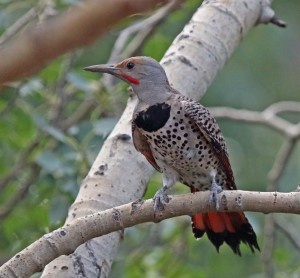 If you have heard the drumming in the past month or seen the swooping flight of this brown and red woodpecker, you know it’s true: the Northern Flicker has returned to the Vail Valley! Northern Flickers are common throughout the valley but their commonality should not be mistaken for ordinariness: these woodpeckers are truly extraordinary birds!

Northern Flickers are in the woodpecker family yet they seem to be the exception for several generalizations about this group of birds. First, unlike other woodpeckers in the area, Northern Flickers are not black and white but brown with small black spots on their body and flight feathers. They all have a distinctive white rump patch that can often be observed in flight and while perched.

There are two kinds of Northern Flickers: Red-shafted and Yellow-shafted. The Flickers found in the Vail Valley are Red-shafted, meaning the shafts of their flight feathers are reddish, explaining the red-hue often spied as they glide overhead. Yellow-shafted Flickers are mostly found in the eastern part of the country. The two used to be considered different species but have been found interbreeding and therefore have been combined into one species.

Like other woodpeckers, Northern Flickers use their drumming (the repeated drilling of the beak on a hard surface like a tree trunk) to communicate and mark their territory. However, Northern Flickers do not drum into trees in order to forage for insects as many woodpeckers do. Usually, woodpeckers puncture tree trunks in order to cause sap from the tree to leak which then acts as an insect trap. The birds return to the tree and eat the insects caught in the sap. Northern Flickers are different because they do most of their foraging on the ground. Using their barbed tongues, Flickers eat beetles and ants that are found in the soil and among leaf litter. Their tongue can extend up to two inches beyond their beak which helps them to hunt prey. Despite their preference for insects, Northern Flickers are omnivores and will also consume berries and seeds, especially during the winter when insects are scarcer.

Another characteristic that sets Northern Flickers apart from other woodpeckers is their migration. Most North American woodpeckers do not migrate but most Flickers who live in the northern part of their range will move south to spend the winter. This explains the absence or decrease of these birds here during the winter time.

As is true for birds of all kinds, the spring is a busy time for Northern Flickers. They are finding mates, building nests, and raising their young. Flickers are cavity nesters like other woodpeckers and usually both the male and the female help to excavate the nest in weakened trees, especially aspens.

Although Red-shafted Flickers might be a common bird of the valley, they are quite uncommon when it comes to their appearance and life history as compared to the rest of the woodpecker family. Look for these unique, easy-to-spot birds and appreciate the variety of color and behavior they bring to the Eagle Valley!

Molly Schreiner is a Graduate Fellow Educator at Walking Mountain Science Center in Avon. She loves the details of the Northern Flicker’s feathers and wishes she could swoop around just like them!