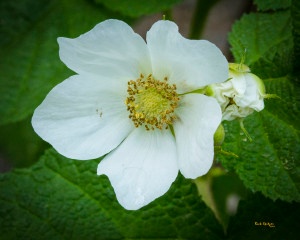 As summer presses on, some of nature’s sweetest treats are ripe for the picking. Wild berries are a delicious and nutritious staple to both humans and animals alike. It is no coincidence that berry season coincides with the beginning of hyperphagia, or the gorging behavior of wildlife like black bears, who are rapidly fattening up for winter. Plants that produce edible berries are hoping that animals will disperse their seeds to new areas, either by dropping them or defecating their undigested pits somewhere new.

As with all of our interactions with nature, wild berry harvesting should be done wisely and with as little impact as possible. A good rule of thumb is to take only what you will eat or use in the next 2 days, or less than 25% of the berries from their shrub or patch. Especially in the heavily used public lands surrounding Vail, it’s important to be conscious of our fellow creatures and let everyone enjoy these delectable delights. 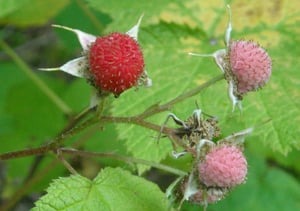 The Thimbleberry In Colorado

The Thimbleberry is a delicate treat found locally this summer. Rubus parviflorus, if you prefer the Latin, is not a true berry. Much like the raspberry, the fruit is considered to be an aggregate, meaning it is made up of a group of druplets centered on a core. These can be removed very carefully, leaving an indentation on the berry similar to a thimble shape. They begin to make their appearance in late July, notable from the fragrant smell of the berries and the flowers. Large, fuzzy, palmate leaves with white flowers give the plant away. The berries will be a bright red by the end of summer, and are best for eating straight from the plant. Due to the delicate nature of the berries, it is uncommon to find jams in stores. However, there are some refreshingly simple homemade Thimbleberry jam recipes out there. Mix one part sugar and one part berries over medium heat until boil, let cool, and enjoy on anything and everything. 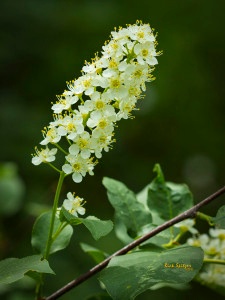 The Chokecherry in Colorado

Another local berry, the Chokecherry, may have an off putting name, but add a bit of sugar, and you’ve got a delicious homemade syrup right from your backyard. They are quite astringent when raw, and the pits contain toxins, but they are harmless once cooked. The shrubs can be quite poisonous to horses, cattle and deer due to cyanogenic glycoside in the leaves, but the fruit is commonly used to make jams, jellies, or pies. A woody shrub or small tree, this plant’s dark green leaves and white cylindrical flower groups help identify this plant. Once ripe, their dark blue berries hang in grapelike clumps called racemes. 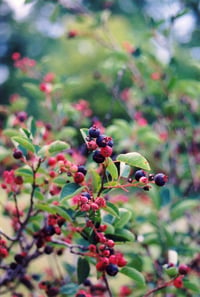 The Serviceberry Saskatoon in Colorado

The Serviceberry, also called Saskatoon or Bearberry, has long been used as a staple food for humans and wildlife alike. The drought resistant roots and cold resiliency make this shrub perfect for our Rocky Mountain climate. White clustered flowers begin to appear in early summer, followed by the purple-red berry later in the season. The berry has been said to have the appearance of a blueberry with the taste of apple. Much like the rest of the Rose family, the serviceberry packs a nutrient punch. Very high in magnesium, iron and potassium; these can be eaten fresh off the twig, or cooked.

Disclaimer: Just because berries look edible does not make them so. It is important to know the facts before going harvesting, and especially before ingesting anything! Luckily, it is just as fun to ID these plants as it is to enjoy their fruit!

This article was written by Rachel Barfield and originally published in 2015. It has since been updated by Walking Mountains Science Center.