Beautiful and Blue: The Colorado State Flower, The Columbine 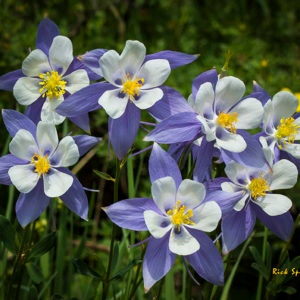 If you’ve been out hiking recently, you have probably seen this striking flower blooming in the summer wind. The pale-blue to lavender sepals, the delicate white petals, and the golden pistils is the signature look of Aquilegia caerulea, or, more affectionately, Colorado Blue Columbine.

This eye-popping flower was first spotted by Edwin James, a geographer and geologist way back in 1820. He was the first person to complete a recorded ascent of Pike’s Peak near present-day Colorado Springs as a part of the Stephen Harriman-Long Expedition. In his journal, he described Blue Columbine growing in “shady woods of pine and spruce within the mountains, rising sometimes to the height of three feet.” (James et. al, 2007). The mountaineer’s description is still true today, and these beautiful flowers can also be found in damp Aspen meadows or in the cool shade of Ponderosa pine. Most notably, however, Blue Columbine is fairly tolerant of the harsh, subalpine environment and can even be found as high as 11,000 feet in elevation, basking in the full summer sun.

Blue Columbine’s beauty has captured the hearts of many. In 1891, the school children of Colorado voted for it to be the State Flower, beating the cactus by a landslide. However, the state legislature was not so quick to adopt it. In 1899, a women’s club in Cripple Creek collected the necessary paperwork to push it through. Finally, 34 years later, in 1925, the state legislature approved the Blue Columbine as Colorado’s State Flower. In addition, they passed an amendment to protect all columbines, which were quickly growing in gardener popularity and disappearing from woodlands. This amendment is still in effect, and protects columbines from being picked on public land. However, you can still legally pick up to 25 stems, blossoms, or buds per day. On private land, this amendment does not apply.

Since then, the Blue Columbine has been a source of pride for Colorado. One reason that it was chosen as our state flower is because it represents the state extremely well: The bluish sepals represent the clear, Colorado sky; the white petals reflect the snow-capped mountains; and the yellow pistils are rich with Colorado’s gold rush history.

Many have adopted the native flower into their gardens, and added their own green touch to them, resulting in numerous varieties of columbine that would otherwise not be seen in the wild. Cultivars such as Origami Columbine and Crimson Star now bloom alongside other buttercups, or Ranunculaceae, the family that all columbines belong to. Buttercups are can be identified by their multiple, simple pistils at the center of the flower, and have enormous variation, spanning 2,346 different species. Columbines are most known for the spurred petals on their flowers, resembling eagle claws, hence the genus Aquilegia. Many species are also poisonous and closely related to baneberries and monkshoods. Blue columbine is not poisonous, but should still be handled with extreme caution and ingested only minimally, if at all.

Long-tongued hawk moths, on the other hand, are able to drink the nectar buried deep inside the flower. These pollinators are able to tolerate the sub-alpine environment much better than ordinary bees and do most of their work at night. Columbines and their pollinators have a very strong relationship, and can evolutionarily be tracked back in time to their place of origin: Asia, circa 10,000 years ago.

Today, we can see the Blue Columbine and understand how far it has come, and how it has grown with us enough to be adopted into Colorado legislature. Consider yourself lucky to see such a breathtaking flower this summer, rich in beauty and history, and of course, happy hiking!

Rori Bassler is a naturalist at the Walking Mountains Science Center for the summer of 2016. She enjoys hiking and frequently stopping to smell the flowers, as well as drawing and coloring them in her journal.