These ‘Bird Brains’ Are Anything But! 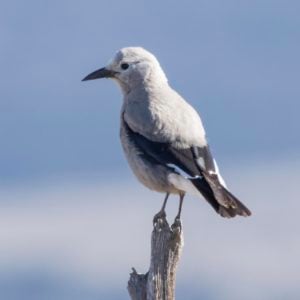 A local high-mountain dweller has evolved an ingenious way to beat the empty belly blues during long Colorado winters. It’s the Clark’s Nutcracker: a tiny-brained individual bird in the jay family (Corvids) with big data potential when it comes to memory for maps. This nutcracker isn’t just memorizing the locations of the valley’s best restaurants, however. It’s keeping to itself up near treeline in the conifer forests it calls home and gorging itself at its own pre-set buffet of cached seeds all winter. But how does one little bird remember the location of so many seed caches?

The Clark’s Nutcracker spends a good chunk of its summers harvesting, collecting, and caching seeds from the cones of whitebark pines. They’re quite adept at this; some studies indicate the nutcrackers can harvest as many as 32 seeds a minute, stashing them in a pouch underneath their tongues as they flit from cone to cone. This pouch, not unlike those of squirrels and chipmunks, can hold roughly 90 seeds at a time. After collecting their fill, the nutcrackers then set to the task of hiding it – two or three seeds at a time. This results in one nutcracker creating anywhere from 5,000-20,000 caches on the forest floor or tucked into tree nooks during the fall months. Come winter, the birds will start feeding from these caches, somehow managing to re-locate them in the newly snow-covered landscape.

This re-location is made possible through careful attention by the birds; research suggests each time a cache is created, the nutcracker will make note of two or three landmarks in the nearby area. The bird then saves these landmarks as a sort of mental map to be consulted in the winter when the time comes to dig up the seeds. It is unclear whether the nutcrackers use the relative distance or angle at which the cache is located from these markers, but research conducted in the 1970s clearly showed that if these markers were moved even slightly, the birds lost the ability to find their food.

These mental maps help the Clark’s Nutcracker stay well fed during the winter and actually give it the ability to have young much earlier than other bird species; the nutcracker nests in late winter. By using these thousands of stored seeds, a nutcracker can feed its young while snow still covers most other food sources.

While clearly an amazing adaptation, researchers studying these mental maps are still baffled by one thing: How can so much data be stored in one tiny ‘bird brain’? The nutcracker exhibits an ability to remember far more than the size of its brain suggests it should be capable of: 5,000-20,000 maps stored and retrieved with ease over the span of nine months. Chickadees have a similarly impressive capacity to remember food stores, stemming from a documented increase in number of neurons (and, therefore, brain size) during the winter. Research teams have not yet been able to discern the mechanism behind how the Clark’s Nutcracker pulls off this feat, however. So, for now, it seems this tiny genius will keep its secrets as well as keeps its memories.

Ellen Badger is a Naturalist at Walking Mountains Science Center in Avon who enjoys getting lost in the woods and can frequently be found attempting to ask small birds for directions.