Boreas Pass Colorado: All That's Left Is A Road 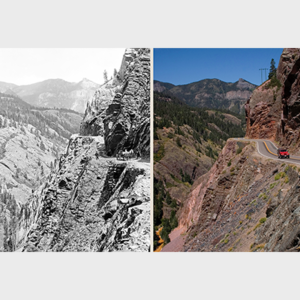 Tucked away deep into the White River National Forest lies an abandoned ghost town. A town that was once a vital stop along the railroad from Denver for miners looking to bite off a piece of the American Dream. And before the miners, there were the original inhabitants of the land. The people who had no idea what “America” even was. They used this area as a trail to follow the migrating mountain mammals that they would hunt. An area that once had so much purpose has now lost all of its original function as the wheels of progress continue to turn.

But ancient purpose gives way to modern day luxuries. What sits atop of Boreas (Pronunciation: Bore-ays) Pass today is a road where you can find endless scenic views of our national forests or the nearby towns of Breckenridge, Summit, and Park counties. Sitting at a high elevation of 11,481 feet, the most convenient way to reach the Pass is by taking the graveled 21 mile Boreas Pass Road that departs from Breckenridge.

Before Boreas Pass was transformed to accommodate automobiles post World War II, it was accessible by many other means. Prior to the early 1860’s the Boreas trail was used by the native Ute Indians for hunting, but the trail was later widened to allow wagons to make use of the area. Fast forward 20 years and gold was found in Tarryall Creek, thus opening the flood gates of miners moving west from Pike’s Peak in search of their own riches. They believed the bounty could be found in Breckenridge. In order to arrive in Breck, the miners had to head straight through the Front Range. Because of the high increase of westward expansion, the Union Pacific Railroad began to lay tracks in the Boreas area in 1882. While the railway was being built, the harsh winters and high elevation prompted the creation of a small town to help manage the railway. Thus, the present day ghost town of Boreas on top of the pass was erected.

But as you drive through many of these passes, you may still find yourself asking, what are these structures? Why were they built? When the town was first constructed, only a few bunk and wagon houses were assembled. This was simply to allow for basic shelter for railroad workers during all seasons. The main task of these workers was to maintain the tracks, especially during the winter. Maintaining the tracks ranged from repairing boards along the line to clearing the many feet of snow that would accumulate over the winter season. During the peak years of the railroad (late 19th century to early 20th century), Boreas, like many other rail towns on top of passes, had grown so large that post offices and town halls were built to accommodate residents. But by 1905, the post office in Boreas was closed down and from there, the rest of the town began to decline. The town lost its last residents in 1934 when the station in Boreas burned down. The railroad continued to run through the pass until 1937 when the route was discontinued.

Today if you drive along Boreas pass, you will see the ruins of the old rail town. Small, refurbished wooden bunk houses and the foundation of multiple burnt down structures. All of this accompanied by stupendous views of Aspen Groves and their fall foliage. This true historical and natural gem is literally only miles away from Eagle County. It might not be too late to enjoy it before the snow flies!

Eric Newsom is a Naturalist and Suitability Intern at Walking Mountains Science in Avon. Eric strives to help individuals redefine their relationship with the natural world in the hopes of bettering the world we live in and promote more sustainable living by all.