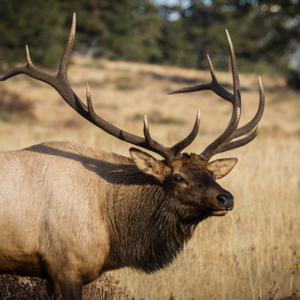 At the base of Vail Mountain, the villages are filled with twinkling lights, colorful decorations, warm fireplaces, and happy families; there’s no question that the holidays are fast approaching. Exploring the snow-covered valley floor, you stumble upon a set of hoof-prints and follow them to find a herd of majestic animals with large antlers that don’t seem at all troubled by the deep snowfall. You scan the group eagerly for a shiny red nose, thinking this could be Santa’s reindeer! In reality, we’re unlikely to spot any reindeer in our valley, but the elk that are native to this area are close relatives and you might be able to meet some reindeer at the family reunion!

Just like humans have complicated family trees, scientists can sometimes have trouble keeping track of just where an animal’s evolutionary history fits in on the tree of life. Scientists try to overcome this confusion using a branch of science called taxonomy, which can be used to classify how different groups of animals are related to one and other based on their evolutionary history. Modern taxonomy uses eight different levels to classify an organism, from the broadest to the most specific: domain, kingdom, phylum, class, order, family, genus, and species. Using taxonomy, we can find out how closely the elk we see in our valley are related to Santa’s reindeer!

While the chances of seeing Rudolph hanging around the back bowls are slim, he does have some interesting relatives living in the valley. Depending on the season, you can spot mule deer, elk, moose, bighorn sheep, and even mountain goats exploring the mountain ranges in the White River National Forest. Even though these Ungulates often live close together, they actually belong to different families. Bighorn sheep and mountain goats belong to the Bovidae family, along with cattle and antelopes, and are characterized by permanent horns made of keratin (like human fingernails). Deer, elk, and moose belong to the Cervidae family, characterized by their bony antlers that males lose and regrow every year; sometimes at a rate of an inch of bone per day!

Reindeer, elk, deer, and many other hooved animals we are familiar with all belong to a group of animals called Ungulates, which literally means “being hooved”. The ungulate classification is considered a clade, or a group of organisms, that evolved from a common ancestor. There are several different taxonomic orders that are considered to be Ungulates, with the two main orders being either “odd-toed” or “even-toed” ungulates. Reindeer, along with the ungulates that we’re familiar with here, are even-toed ungulates belonging to the suborder Ruminantia. Animals in this group rely on fermentation processes in their stomachs to digest their plant-heavy diets, just like some of us might rely on fermentation processes to get us through family meals.

A little change in latitude is all we need to find the cousins of our local Ungulates, the reindeer (or caribou as they’re known in North America). Anywhere from the mountainous regions of Canada and Northern Eurasia to the Arctic Circle itself, you run the chance of spotting the beloved animal that, according to the folklore, makes Santa’s magical trip possible. Reindeer also belongs to the family Cervidae, but unlike the Cervids we are familiar with, both male and female reindeer grow antlers. Reindeer are also the only Cervids to be fully domesticated. In addition to pulling Santa’s sleigh, they are also used to pull small toboggans called pulks in regions of Norway, Sweden, Finland, and Russia.

We know it’s important to think about family during the holiday season, but we don’t often think about the families of wildlife. So while you’re out on the slopes or the trails this winter, keep an eye out for Rudolph’s closest cousins - Cervus canadensis (elk), Alces alces (moose), and Odocoileus hemionus (mule deer). Happy Holidays!

Haley Baker was a Naturalist and Sustainability Intern at Walking Mountains Science Center during summer, 2016.