Snow Snake? No, that's a Weasel! 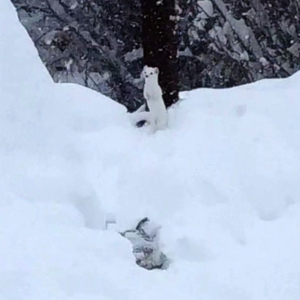 What’s that rabbit running from?! It’s not a bobcat or a hawk; the rabbit is running from the tiny but fierce weasel, one of Colorado’s smallest mammalian predators. At one-third the size of a rabbit, weasels are unexpectedly ferocious hunters. Unlike bobcats, mountain lions, or bears, weasels are fairly common predators to see in Colorado—especially in the winter!

We use the term “weasel” interchangeably to refer to two species of weasel, the long-tailed and short-tailed weasel, which are nearly identical other than a difference in the length of their tails. Weasels go by many names, including stoat and ermine, with ermine being the common name for these creatures when their brown summer pelt turns winter white. These playful and agile little animals are adorable and fun to watch, but they are also some of the most ferocious hunters in the animal kingdom. It was once said that if weasels were the size of mountain lions, it wouldn’t be safe for humans to go outside.

As small predators, weasels burn a ton of calories. Because of this, a weasel must eat close to half its body weight a day to make up for the energy it uses. This has lead to a hunting instinct unlike few others. Weasels have been known to hunt prey whether hungry or not. There are reports of weasels getting into hen houses and killing every hen out of instinct to hunt every available prey. Despite these occasional tales of weasels hunting without a need for food, weasels do not commonly waste resources, as they know that every hunt has an energy cost.

Weasels rarely have a permanent home; instead they use the burrows of their prey, where they often store leftovers under the snow in the winter. Not only do weasels store food in these natural refrigerators, they will also use the non-food parts of their prey, such as the fur, to keep warm on cold nights!

How is a weasel able to take down prey far larger than itself?

Seeing a weasel in mid-hunt is truly an amazing experience—one that I was lucky enough to witness very recently when I saw one take down a rabbit. It was a typical morning at Walking Mountains Science Center in Avon and my coworker and I were watching a rabbit right outside our front door, when it suddenly turned and ran the other way. We looked and saw that a weasel had just popped its head out of the snow. The chase was on! Rabbits are quick, but they can’t keep up a fast pace for long, and when chased by the smaller weasel, there was nowhere to hide. We watched the weasel chase the much larger rabbit all the way around the building and back out front where the weasel was able to deliver the final blow—a bite to the back of the neck just below the head, severing the spinal cord of the rabbit and instantly paralyzing or killing it. Now came the challenging part as we watched the tiny weasel dancing around his much larger prey - how does a weasel carry off a meal three times its size in over a foot of snow? The little weasel seemed unsure at first, but eventually it crawled underneath the rabbit and began carrying the rabbit off on its back! Once it reached the unpacked snow, the weasel dug a hole straight down and disappeared with its dinner, traveling underneath the snowpack for ease as well as safety from scavengers. It is not often that we get to witness a predator-prey relationship first hand, but given how common weasels and rabbits are, it is probably not an uncommon sight, but it sure was exciting—and far safer than watching a mountain lion chase its prey!

Keep an eye out for weasels anywhere from the mountains to your own backyards and you may be lucky enough to witness first hand one of Colorado’s most ferocious and agile little hunters.

Paul Leininger is a Naturalist and Sustainability intern for Walking Mountains Science Center. Paul wishes to share his passion for the nature around us from coast to coast through engaging and inspiring natural science education.