Slope Aspect in Colorado | It All Depends on Your Perspective 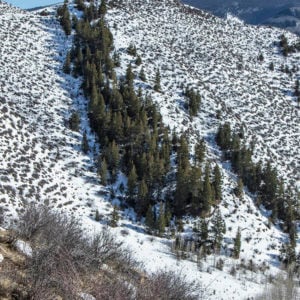 While driving on the highways that wind their way through the mountains, you may have noticed that the hills on the right side of the car often look very different than the hills out your left-side window. Perhaps you noticed that the hills on one side of the highway tend to be covered in trees, while the hills on the other side of the highway have very few trees, if any. The hills on both sides of the highway generally experience the same overall temperature, receive the same amount of precipitation, and may even have the same slope gradient. Yet, regardless of these similarities, they tend to look vastly different. So, what is it that makes these hills look so different from one another? The answer lies in their slope aspect. Slope aspect is the term that ecologists use to describe the cardinal direction that a slope faces.

This difference in solar radiation, in turn, has a dramatic effect on the physical and biological appearances of these slopes. For instance, because north-facing slopes receive less solar radiation, they are cooler in temperature and able to retain more moisture in their soils. Thus, north-facing slopes tend to be covered in dense forests of evergreen trees. In contrast, south-facing slopes are generally warmer with relatively dry soils, due in large part to a high evaporation rate from the direct sunlight. As a result, these slopes don’t have many trees and are instead covered with small, drought-tolerant shrubs. We see the same phenomenon on east and west facing slopes, although it is generally less pronounced, with more trees on east-facing slopes and more shrubbery on west-facing slopes.

As you might guess, the presence of specific plants, influenced by slope aspect, impacts the animal species as well. For instance, in the summertime, wild animals are more likely to spend time on north-facing slopes where they can hide in the shade of evergreen trees. In the winter, however, we are more likely to see animals on south-facing slopes where the snow melts more quickly, leaving forage uncovered and accessible.

Overall, aspect is an important factor in determining what the ecosystem on a mountain slope will look like. It is important to consider a slope’s aspect when trying to study, conserve, or even recreate on a slope. This is especially true in the winter, when a slope’s aspect can impact the likelihood of finding deep powder or even a potential avalanche. In fact, if you are going to be skiing or snowshoeing in any kind of known avalanche terrain, be sure to consider the impacts of aspect on the slopes. Digging a snow pit on a slope with even a slightly different aspect than the one you plan to hit can give you misinformation. So when skiing or snowshoeing this winter, especially in known avalanche terrain, be sure to consider the stability of the snowpack and how this might be subject to change based on slope aspect.

Directionality clearly has an impact on the microhabitat of a slope; it effects everything from the vegetation to the wildlife, to the depth and stability of the slope’s snowpack. So on your next venture into the mountains, look for differences between the slopes on either side of the valleys and see if can use your knowledge of aspect to predict the base places to watch for your favorite species!

Liz Walsh is a naturalist with Walking Mountains Science Center in Avon and she loves to snowshoe in the wintertime, on slopes of all aspects.