Get Back to Nature with an App 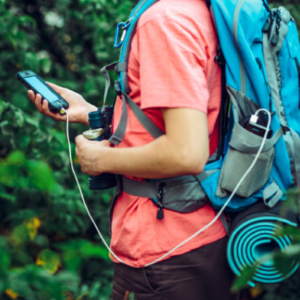 Last June, I returned to my home in Eagle after a Walking Mountains Science Center summer program.  The parcel adjoins public land and so I was surprised as I slowed up the gravel drive to see two figures beyond the garage.  Oddly, the strangers were looking straight down at handheld smartphones while walking my way. When the gamers entered my garden, they smiled and I recognized two friends. I asked what they had been up to. Turns out, they had been playing Pokemon Go, an augmented reality application for their smartphones.

For those of you who missed the fad, Pokemon Go brought the science-fiction story of wild-caught genetically-engineered pets to life.  Throngs of gamers left their indoor systems behind to explore their neighborhoods with one aim: to catch them all.  To catch location-based cartoon Pokemon imposed on a live camera feed. I teach Science Technology Engineering and Math, and I perceive all kinds of bewildering STEM facets to the Pokemon Go app. I'd love to digress into how Pokémon exposes children to technology, sustainability, and natural sciences. Here, however, I only address Pokémon Go as an example of a controversial app that actually helped people connect with the natural world.

Can Devices be a Motive to Get Outdoors?

Arguably, staring down a smartphone when outdoors isn't really a connection with nature. It is more like exposure to nature. As ecologist Aldo Leopold suggested, begin “reappraising things unnatural, tame, and confined in terms of things natural, wild, and free.” (A Sand County Almanac, 1949) Before your next hike, consider how unnatural even pocketing a phone is in comparison to packing say, a snack, pen, and journal.  Nonetheless, aren't there some apps which truly do bridge a natural connection?

So Many Apps to Choose From!

Take a giant leap and imagine you are an explorer from the Starship Enterprise. Everything you need to describe your alien surroundings is fundamental in your device, so “boldly go where no human has gone before,” and… take pictures on your next adventure with a whole new purpose. Seriously! Unlike a desktop computer, a smartphone is a convenient field tool, with online and offline resources which can help us connect with nature.

Whether you are just getting into the outdoors or you’re a seasoned traveler, here are some amazing apps to help you discover new routes:

If you want to expand your knowledge about nature, try exploring some reference apps to add to your background understanding of nature. My 3 top picks are:

Mobile Apps are not the only way to Connect to Nature

Some of my favorite smartphone tools for connecting with nature are ones we all take for granted. They aren't even apps. My compass, for instance. Everyone phone has these tools, yet not every phone owner uses them. During my own backcountry outings, I also utilize my camera, microphone, and digital sketchpad. In order to better perceive the rhythms of Mother Nature, I also recommend upgrading devices by downloading a time lapse app, something like Lapse It.

To Connect with the Natural World is an Adventure

If you are curious about the natural world, the apps listed above can work as new ways to connect to nature. But also remember to use your fundamental tools as a scout exploring the universe, your compass, binoculars, hand lens, and of course, your senses.

Returning to the story of my friends playing Pokémon Go in the public lands around Eagle, which may seem like an odd way to connect to nature, but maybe we just need to change our perspective a little. These hunters tread the same lands as autumn elk and deer hunters, but armed with smartphones instead of recurve bows. They hunt digitally generated pocket monsters instead of mule deer, elk, or turkey. They shoot only photos and leave only footprints.  From my point of view, they resemble a new kind of scientific explorer, and while they are searching in the digital world, who knows what they might discover in the real one?

Sage Smith is a STEM instructor for Walking Mountains Science Center in Avon, where he gets to share his knowledge about technology with middle school kids throughout the valley.