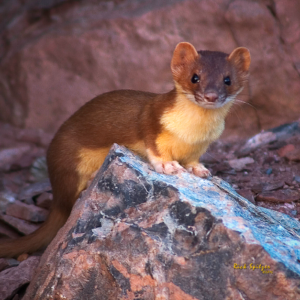 The mysteries of nature are numerous and vast, encompassing questions large and small and constantly teasing us to unravel their riddles. One of these mysteries involves the phenomenon of delayed implantation of embryos. If you’ve never heard of this, you’re probably not alone. In a nutshell, delayed implantation allows a species to delay implantation of the fertilized embryo, sometimes for months, so that the young is born with a better chance of survival.

It sounds pretty amazing, and it is. A fertilized embryo begins its development through cellular division. First, there is one fertilized cell, which divides into two, then four, then eight, and so on, until it forms a hollow ball known as the blastocyst. In a typical mammalian pregnancy, the blastocyst implants into the wall of the uterus, where it turns in upon itself and begins differentiating into the many specialized cells that make up the organism. In the case of species that use delayed implantation, however, the blastocyst simply floats around the uterus for a while, in a state of suspended animation, until cued to implant and continue development by some mysterious, universal calling.

This process wouldn’t be so unexplainable if it only occurred in a few, closely related species, but it actually occurs in a diverse range of species, including mice, seals, weasels, kangaroos, bats, armadillos, red pandas, and bears, among others. How did the same exact process occur in such an evolutionarily diverse group of organisms? Even more confounding is the fact that closely related species have different implantation habits, like the long-tailed weasel, which delays implantation for months while its close cousin, the least weasel, experiences no delay. Factors such as these lead researchers to believe that delayed implantation probably developed independently along a variety of evolutionary pathways and in different geologic times.

Locally, black bears are the most famous species that undergo delayed implantation, with mating usually occurring in June, but the embryos don’t implant until sometime in November. Once implanted, the embryos develop in just over two months, and the young are born in the secret confines of their mama’s den sometime in January. Scientists generally agree that this type of delayed development confers an advantage on the species, allowing the young to be born at a time that is most advantageous for their survival. In the case of bears, being born in the security of the den protects them during their most vulnerable days, allowing them to gain weight and develop before venturing out into the world.

Research in the area of delayed implantation has been a somewhat frustrating process, partly because of the diverse range of species involved and partly because it appears that the mechanisms may differ from species to species. Researchers have found certain cues that can enable them to get an entire room full of mice pregnant at the same time, but these tricks get old fast and scientists seem stuck at determining the specific mechanisms responsible.

But in terms of unraveling the mysteries of the natural world, this phenomenon is thought to have great potential, particularly in the race to fight cancer. Cancer cells are characterized by rapid cell division, and delayed implantation essentially stops, or pauses, cell division. A mechanism that can stop uncontrolled cell division could offer incredible potential if we were able to tap it. But discoveries like this one are still a long way off in our never ending quest to unravel the mysteries of the universe. In the meantime, we can just appreciate that we are here, right now, able to appreciate this type of mystery.

Jaymee Squires is the Director of Graduate Programs at Walking Mountains Science Center in Avon.Bears are her favorite animal and she is endlessly fascinated by their unique biology and ecology.