The Black-crowned Night-Heron in Colorado 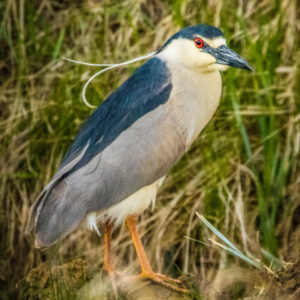 The community is bustling as herons, egrets, and ibises come and go from the large cottonwood tree. While most birds nest in mated pairs, a few nest communally, sharing the warmth and protection of the roost with other birds, usually of the same species. But a few birds are less particular, sharing the warmth and comfort of the roost with a variety of species. The Black-crowned Night-Heron is one of these birds. They mate for life, but the mated pairs build their nests in communal roosts, sharing the space with all sorts of other water-loving birds.

When we think of herons, we think of the classic great blue heron, with its statuesque posture and distinct flight pattern, but the world’s most widespread heron is the one described above, the Black-crowned Night-Heron. The Night-Heron is more elusive than its blue and green cousins, since it spends its days in communal roosts and comes out at night to forage.

The Black-crowned Night-Heron is a chunky bird with shorter legs than its more familiar cousin, but it inhabits a similar habitat, partitioning the niche by foraging at night instead of during the day. The Night-Heron is a social bird, breeding and living in large colonies of stick nests, usually built above water or wetlands. It is believed that the Night-Heron is a monogamous species, mating for life and living communally in marshy areas across North and South America.

The Night-Heron is a voracious and opportunistic feeder, dining on a variety of terrestrial, freshwater, and marine animals, but they will also eat carrion or even garbage. The Night-Heron secures prey by grabbing it in their lightning-fast black bills, as opposed to the great blue heron’s habit of stabbing its prey before tossing and gobbling it.

During the mating season, the male begins building the nest, a platform of sturdy sticks and twigs, before setting out to attract a mate by bowing and flaunting his head plumage. Once smitten, the pair take turns incubating the eggs and brooding the chicks, greeting each other with calls and raised feathers when switching roles. The Night-Herons have some interesting brooding habits, and the adults have been known to brood any chick placed in its own nest. Once they reach a month old, the young chicks leave the nest, despite the fact that they can’t fly for another two weeks. The young birds move through the vegetation on foot, using their more camouflaged speckled coloring to avoid predators and joining up with foraging adults at night. The young birds also have an added measure of protection, which is that they often disgorge their stomach contents when approached, distracting or grossing out potential predators.

Locally, Night-Herons have been spotted near the Gypsum Ponds, as well as in other marshy areas like the ponds near the waste treatment center in Avon and along the Colorado River. They have an almost ghostly flight pattern, swooping down with strong steady wingbeats as they leave the roost and head for their favored feeding grounds. The Night-Herons spend the dusk and dark hours foraging avidly before returning to their communal roosts before dawn.

Maybe we can learn from the Herons and their brethren, as they come and go, sharing the warmth and comfort gained by roosting in the same tree. Nesting together with white ibises and snowy egrets, the Night-herons don’t discriminate. They simply share their space. Not a bad lesson.

Jaymee Squires is the Director of Graduate Programs at Walking Mountains Science Center in Avon. She has yet to see a Black-crowned Night-heron, but that doesn’t mean she will stop looking!