Resilience of Plants in Alpine Zones 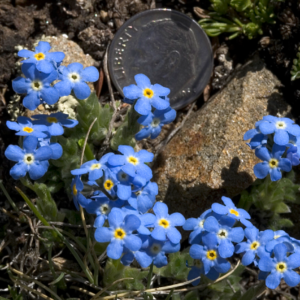 The world of alpine plants encompasses many species and even more secrets to survival. Adapting to a world where extremes are the norm takes persistence and flexibility; but each summer, the alpine plants reappear, reaffirming our faith in the resilience of life.

These miniature majestic microcosms spread out beneath our feet as we scramble up summits or tread through the tundra. Maybe you take them for granted, or maybe you take a moment on your climb to pause and appreciate their picturesque perfection. Life in the alpine zone is not easy; even during the summer when there is no drifting snow or icy winds, the bright sun beats down during the day, drying the soil and bombarding leaves and blooms with heat and UV radiation.

In the alpine zone, even during the hottest summer days, temperatures seldom exceed 60°F, and temperatures in the winter average around -30°F. But it turns out that microclimate is more important than climate in determining which plants will grow where. Temperatures just a few feet above the ground can be considerably colder than temperatures directly above the surface, and some low growing plants can actually warm the air, creating pockets of warmer air that are sheltered from the wind. Temperatures inside flowers, for example, have been documented to be several degrees warmer than surrounding air temperatures.

The world of alpine plants can be considered one of give and take. Slight differences in topography, surface composition, and exposure create microclimates which dramatically impact where plants grow, and the plants, in turn, further modify the habitat. These plants also provide valuable forage for a large number of herbivore species, including large grazers like mountain goats and bighorn sheep, but also numerous small burrowing animals, including pika, voles, and pocket gophers. The action of these species on the soils, in turn, impacts the species that take root in an area. So while growth and change are slow, they are happening, like they are in all ecological communities, and we begin to see that the species composition and arrangement in the alpine zone is both dynamic and deliberate.

A hike in the alpine zone reveals some of the most colorful wildflowers in the mountains. Some of the most common species we see in the tundra include moss campion and the whiproot clover, both common in fellfields communities (plant communities in rock fields) and in disturbed sites, which is why these species are commonly seen alongside hiking trails. Other common alpine plants include sky pilot, alpine bistort, alpine wallflower, mountain harebell, alp lily, narcissus anemone, and alpine forget-me-nots.

The plants listed above have a diverse and impressive array of adaptations that help them survive. Some, like the alpine bistort, reproduce by ejecting little “bulblets” from the flower head, completely eliminating its need to produce seeds. The bulblets grow a shoot, sometimes while still on the parent plant, and these take root quickly in any nearby disturbed soil. Other plants, like moss campion, grow in cushion shapes, creating pockets of warmer, still air. And still other plants, like the alpine sandwort, sprout roots wherever their shoots touch the soil, also eliminating the need to expend energy producing seeds.

The descriptions of the alpine plants above only scratch the surface of the world of the alpine tundra, which hold secrets far beyond those already deciphered. The resilience of these tiny, ancient plants should serve to remind us that all forms of life face challenges, and sometimes you just need to wait for spring.

Jaymee Squires is the Director of Graduate Programs at Walking Mountains Science Center in Avon. She relishes the brief window when she can get to the alpine zone and see some of her favorite blooms!