The Secret Life of Pine Martens 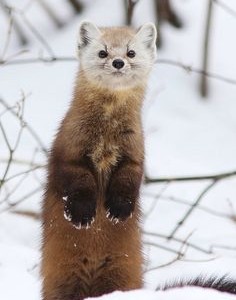 This last winter, I had the privilege of working in Yellowstone National Park, where I befriended some of the local winter wildlife. This included the American pine marten. Under normal circumstances, this animal is curious, but elusive; except when it came to trash compactors, then they were not shy about showing their cute little faces. They would often jump out when I opened the doors or “played” in the snow chasing each other around the machines.

For those who have never seen a pine marten, it is described as a cat-like creature with rounded ears, almond shaped eyes, a bushy tail, and a long slender body. Though they are not related to cats, they do sound like angry cats when enraged. The marten is about 18-27 inches in length from nose to tail, where its bushy tail is about 1/3 of its body length, aiding in balance and agility. These animals range in color from light tan to dark brownish black. On their bellies is a small dot to large patch that is cream colored to orange. They also have strong claws and furred feet, which allows for quick climbing and snowshoe-like paws in the winter months.

American pine martens are active year round, due to their primary food sources being active year round. With their furred paws, they are able to walk or run across the top of the snow with ease. Martens are primarily carnivorous, commonly eating small mammals such as voles, red squirrels, mice, and hares; but also eating birds, eggs, amphibians, reptiles, insects, carrion, and occasionally vegetation and berries. In the summer months, they have even been observed in alpine areas in search of pikas and marmots. They eat 2-3 rodents a day, and although it does not sound like much, it is an equivalent of a 60 pound child eating 100 quarter pounders per day - a lot of food for a small body.

Martens eat a lot of food because they are constantly on the move, covering a 1-3 square mile territory in about a week. During mating season, they build nests or dens in dead trees, which the females line with grasses or leaves. Breeding and mating usually occur in July or August and litters of 2-4 young are born in March or April. Newborn infants weigh about 1 ounce, and are blind and nearly naked. Between 6 and 7 weeks, these newborns open their eyes, wean from a milk diet to meat, and begin to hunt with mom. When the newborns reach 3 months old, the mother will re-enter fertility and leave her children.

These agile animals are threatened by localized endangerment or possible extinction. Like most animals, they have natural predators such as coyotes, foxes, lynx, bobcats, and mountain lions, but humans are their biggest threat due to deforestation, wild fire remnants, and trapping for fur.

The American pine marten is considered a species indicator due to its dependence on mature coniferous forests across the northern US, Canada, and Alaska. A species indicator is a species that is affected by changes in their environment, and changes in their populations can indicate a problem with the ecosystem. These animals prefer old growth forests for denning sites, food sources, and overall protection, but they have can also be seen in man-made structures, especially when food is more prevalent.

As you plan to enjoy the Vail area this winter, keep your eyes open for this curious creature. If you are unable to spot them in the forest, cautiously check the communal trash dumpsters. You never know, you may be in for a surprise.

Alicen is/was a naturalist with WMSC, but worked as a recycling technician in Yellowstone NP for 9 months befriending the pine martens who frequented the trash compactors and despising the clever ravens who terrorized her daily.