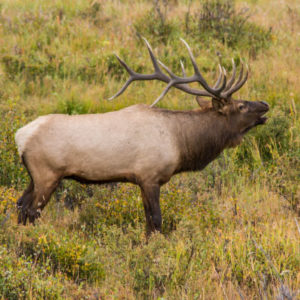 As fall descends on the valley, an epic animal competition arises. Wild-eyed, foul-smelling, extremely vocal bull elk ramble through the forests in the midst of a fierce competition. Their eerie cries echo across the forest and manifest the start of the rut, or elk mating season. During the rut, bull elk utilize visual, olfactory, and auditory sensory signals to attract cows and to win the grandest battle in nature, the battle to pass on their genes.

The bull elk stand proudly with their full rack of antlers, impressing cows and intimidating competing males. By this point in the fall, the bull elk have rubbed the velvet off their antlers. Bull elk grow a new rack of antlers every summer, and velvet coats the emerging rack, providing blood flow as they grow. Once the antlers are fully grown, the velvet coating is irritating to the bull elk, and he scrapes it off using trees and bushes, leaving long slashes on the trees where they scrape the bark. The antlers, formerly white as bone underneath the soft velvet, turn a medium brown. Although antlers might look intimidating, sparring between bulls is rare because it is energetically costly to both the winner and loser. Instead, bull elk rely on appearance, posturing, and bugling to subdue a competing male.

During the rut, bull elk need to attract as much attention to themselves as they can. In addition to displaying their commanding antlers, males cloak themselves in a distinct odor. Bull elk urinate on themselves to increase their scent profile. Think of it as the elk equivalent to wearing cologne, as they carry this scent to attract females. Particularly ambitious bulls will urinate into a pit of mud and then roll in it, coating a larger area of their body with the strong odor.

Perhaps most noticeable to humans, bull elk bugle to communicate their strength to both cows and competing bulls. You may hear it while hiking, and it does not sound like what you would expect coming from a large mammal. The bugle is a high pitched whistle ending with a low groan. Bugles communicate several messages. A bull could be bugling to warn other bulls to stay away, promote his fitness to females, or exert his dominance a trespassing bull.

The dominant male will travel with and defend several females and their calves. This grouping of one male and multiple females is called a harem, and is common in the animal kingdom. The bull elk will defend his harem from competing males with bugling, aggressive territorial displays, and the very occasional instance of sparring. Violent confrontations are a last resort, as they are energetically expensive for both parties involved. More commonly, one of the two competing males will back down before the confrontation escalates to sparring.

Bull elk take advantage of all their finely tuned senses during the rut to attract cows and pass on their genes. Competition is tense between bulls, and many will fail to secure a harem. Even the bulls that are successful during the fall mating season expend a dangerous amount of energy before winter, and as a result, may not make it to the following spring. Those bulls, however, have already reproduced, and their legacy will live on.

Alexandra Reich was a Summer Naturalist and Sustainability Intern at Walking Mountains Science Center in Avon. Present day, she is probably off trekking in the Himalayas.