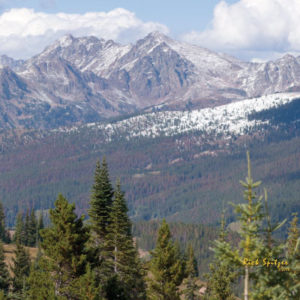 The great Rocky Mountains: a haven and ski destination for people from all around the world. Its rugged ranges and massive fourteeners create an air of mystery and sense of awe for all who visit. But how did they get here? How did landforms as magnificent as the Rockies come into existence? Just the idea of these massive pieces of earth and rock moving is almost unattainable. Surely a force greater than our wildest imaginations would have to be responsible for the formation of something so stunning; a force so strong, nothing could match it.

That force, it so happens, is plate tectonics. Plates holding our oceans and continents move intermittently under the surface of the very ground we stand on. These lithospheric plates slide against, move away from, and crash into one another, all at a brutally slow rate. However, although they only move as little as a few millimeters per year, these plates move with significant force because of their tremendous mass. This results in sustained directional movement of plates regardless of obstacles, so that clashes between plates occur over in many forms over long periods of time.

Herein lies the birth of the Rocky Mountains. During the Laramide Orogeny, which occurred between 80 and 55 million years ago, the Pacific Plate and the North American Plate collided. Due to density and some other factors, the Pacific Plate slid underneath the more buoyant continental plate at a small angle, heading toward the center of the Earth. This created an active subduction zone right off the coast of California.

Now here is where things get tricky. Mountain chains are known to form anywhere between 200 to 400 miles inland from a subduction zone,  creating mountains in a similar fashion to a rug as it gets folded and pushed up over a hardwood floor. The Rockies, however, are much farther inland at 620 miles, giving rise to a unique geological puzzle. A new study published in Geosphere sheds some light on the subject. Craig Jones, a geologist at the University of Colorado at Boulder, suggests that an unusually thick landmass under Wyoming (up to 180 miles thick), created a kind of obstacle for the subducting oceanic plate, creating a suction effect as the oceanic plate tried to squeeze past the underside of the continental plate. This pulled the continental plate downward, allowing liquid mantle to flow into the newly created shallow basin. As the subduction continued, faults in the rock allowed for the upward push, creating the Rocky Mountains. Although not proven, this hypothesis could be a solution to the geological puzzle of the Rocky Mountains.

After the formation of the Rockies, glaciers and rivers created the finishing touches to the landscape we see today. Large scale glaciation occurred during the Pleistocene and the Holocene periods, creating U shaped valleys and high mountain cirques. In the skiing world, these glacial landforms are lovingly referred to as "back bowls." Rivers also helped to create this skiing paradise, forming valleys of their own. These can be recognized by their steeper, more V shaped sides, created by the cutting of mighty water rushing through ancient riverbeds.

We have tectonic action, glaciers, and rivers to thank for this winter wonderland here in the Rocky Mountains. These powerful natural forces are unparalleled in what could be deadly strength, and it’s hard to imagine that anything in our feeble human power could create a world as spectacular and dynamically beautiful as the high country we gratefully call home.

Lily Fanok is a naturalist at Walking Mountains Science center in Avon, Colorado. Lily hails from Pennsylvania and loved spending the summer in Colorado where hiking quickly became her favorite thing to do.