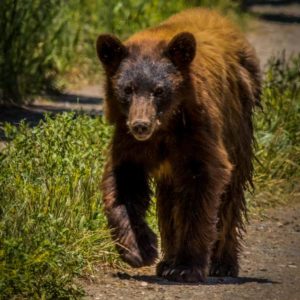 Snug in a hollow tree, cave, or a shallow nest, black bears in winter may be dreaming of berries and honey and lush meadows of grass during hibernation.  But female black bears also have something else on their agenda as they lay curled up, enveloped in thick winter fur. Sometime in mid-January, they will probably be giving birth.

Before their cubs are born, female black bears, sows, must prepare in order to help assure healthy offspring. They need plenty of food and a safe den. Adult bears can spend 20 hours a day in fall eating up to 40,000 calories per day. The accumulated fat is critical in keeping the bear healthy during hibernation and helps the mother give birth to healthy cubs and keep them nourished. Bears are opportunistic and eat whatever they find, including berries, roots, nuts, grasses, insects, honey and carrion. Unfortunately, in populated areas like ours, bears can also take advantage of easy calories in garbage containers, at campgrounds and even in our kitchens via open windows or doors. This confrontation with humans can be deadly for bears. By late fall, adult black bears can weigh 125 – 600 lbs depending on gender.

The second preparation is securing a winter home. Rarely using the same den year to year, black bears secure a den in a hollow tree, cave, a tunnel dug into a hillside, or even a nest on the leeward side of a large tree. Sows will enlist their yearling cubs to help carry leaves, grass, and plants to insulate their den. Lessons learned early in den building are useful lessons for the cubs, who will be on their own by age two.

Sows hibernate in the den accompanied by their yearling cubs the first full winter following their birth. This seasonal reduction of metabolism coincides with a scarcity of food and the onset of cold temperatures. The start of hibernation varies depending on the abundance of available food in fall. During this state, oxygen consumption and metabolic rate are reduced in half, and heart rate slows down to 8 – 21 beats/minute from a normal 80-100 beats/minute. While hibernating, bears will not drink, eat, urinate or defecate. Ingeniously, all nutrients are recycled in their body and no waste is produced.

Snug in their dens, sows give birth every two years to an average of two cubs in January. Although the gestation period is 8 months, embryonic development takes only two months due to delayed implantation - another adaptation that enables the sow to conserve energy reserves. Newborns are about the size of an apple, hairless, with eyes closed and weigh no more than a pound at birth. Newborn cubs are smaller compared to the size of their mothers than any other mammal.  Within two months, cubs have hair about an inch long, can crawl around their cozy den, but count on their mother’s rich milk for food and her heavy coat for warmth. By spring, they can weigh 20 pounds and are ready to investigate the world outside.

With warmer temperatures in early spring, adult bears emerge from their dens and will begin shifting from hibernation to normal function as their metabolic state adjusts to summer activity. Cubs will stay with their mothers for about 18 months – spending one full winter with them in their dens and then will leave prior to the next summer’s mating season, when the two-year cycle repeats.

As you enjoy this January’s second full moon – often called the Bear Moon – know that throughout our valley, newborn cubs the size of apples are being born, beginning another wondrous cycle of nature in our mountain home.

This article was written by our beloved Natalia Hanks. Natalia was the Director of Development at Walking Mountains Science Center from 2005 until 2012, and we are sharing her words in memory of Natalia and the great work she did here and in our community.

This article was written by our beloved Natalia Hanks. Natalia was the Director of Development at Walking Mountains Science Center from 2005 until 2012, and we are sharing her words in memory of Natalia and the great work she did here and in our community.