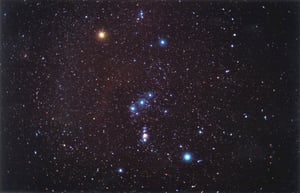 Winter nights can seem long and dark, and it always brightens things a little to see the familiar constellation of Orion lighting up the winter sky. Many constellations can be hard to spot, but Orion’s familiar shape is one of the easiest to pick out. Orion actually looks like a human being, and a hunter at that, with his broad wide shoulders, narrow belt, wide stance, and of course, his sword and shield.

Throughout history, people from civilizations around the world have made note of Orion’s distinct shape and told stories about his deeds and adventures. Perhaps the most famous are the tales told by the ancient Greeks, but Orion was also recognized by the ancient Egyptians, early Jewish civilizations, and the Babylonians. According to the Greek stories, Orion was the son of Poseidon and a nymph. As the son of a god, he was handsome and strong. He was also a great hunter, but a boastful one. According to one story, Gaia, the Earth goddess, sent a seemingly insignificant scorpion to slay him in order to teach him a lesson. This is why, it is said, that Orion sets in the west as Scorpius rises in the east.

Other nearby constellations fit into the story in various ways. Orion supposedly lusted after the daughters of Atlas, the Seven Sisters, and when they were placed in the sky, Taurus the bull was situated in between them in order to keep Orion from the maidens. Orion is also flanked by other constellations, Lepus the Hare is at his feet, and his hunting dogs, Canis Major and Canis Minor.

Astronomically speaking, Orion is also a significant fixture in the night sky. Situated directly on the celestial equator (directly above the Earth’s equator), it is somewhat unique in that it is visible from both hemispheres. For observers in the northern hemisphere, the appearance of Orion signifies the start of winter, while the opposite is true in the southern hemisphere (and Orion is upside down there too). Of the seven main stars that comprise Orion, all except the red supergiant Betelgeuse are young blue supergiants. Each of these stars has its own story to tell, some more unique than others. Rigel, Orion’s left foot, is actually a triple star system, located 772.51 light years away from Earth. It is 17 times larger than our sun and shines 85,000 times brighter!

The oddball of Orion’s stars is Betelgeuse, the red supergiant. Located 642.5 light years away from Earth, it is close to the end of its life at 10 million years old, and is expected to end its life in a supernova explosion sometime in the next million years. At that point, the star will emit a light as bright as the full moon, then fade several weeks later, leaving a dark void where Orion’s strong shoulder once stood, and altering this familiar constellation forever.

The points of light that we identify as the stars of Orion and other constellations are not always singular stars, as we saw with Rigel. Of the three stars that make up Orion’s sword, the middle star is actually the Orion Nebula, a huge cloud of dust and gas almost 25 light years across! Four stars at the center of the nebula, known as “The Trapezium,” make the nebula bright enough to be visible from Earth.

Orion will rise tonight, like he does every winter eve. And maybe he is looking down at us here on Earth, seeing us as we see him, as tiny little pinpoints of light dancing in a dark sky, bringing beauty to a dark world.

Jaymee Squires is the Director of Graduate Programs at Walking Mountains Science Center. Orion is her favorite constellation and she was excited to have the chance to learn a little more about him.