Beware the Horde of Hamsters! 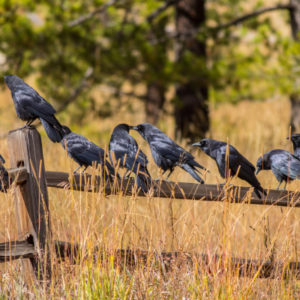 A herd of deer looked out over a gaggle of geese, as a murder of crows watched from the treetops. Some of these terms for animal groups may be familiar, while others may not, but beyond these slightly odd terms for groupings of particular animals, there are many far stranger.

Just locally, you might be lucky enough to see a murmuration of starlings gathering overhead in shifting clouds, or witness a scurry of squirrels as they fight over crumbs in the park. Or maybe you will see a rare gathering of porcupines, known of course as a prickle! You might also see the common coyote, who travels in a band (although other names are common), while his larger cousin the wolf travels in a pack. If you venture towards the river, you might watch a family of otters on the banks, or a hover of trout flitting through the water, or even a colony of beavers as they build away. But if you are really lucky, or up in Alaska during the salmon run, you just might catch a glimpse of a sloth of bears as they tolerate one and other’s presence to take advantage of valuable calories.

Oddly enough, there are even names for groups of animals that are unlikely to group together. For example, many of us are familiar with the term for a group of owls, called a parliament of owls. But most owls are territorial and live solitary lives, only gathering in pairs during the mating season. So it’s hard to imagine a large parliament of owls sitting together in a tree, but just in case, there’s a word for that. Other groupings that you’re unlikely to actually see include a gang of weasels, a herd of moose, a mob of wolverines, a surfeit of skunks, a richness of martens, or a labor of moles. In fact, only one species of moles, the star-nosed mole (who does live locally) is known to nest communally. Most of the above species are highly territorial and unlikely to tolerate the presence of another of the same species unless it’s mating season.

Interestingly, a lot of names for animal groups are related to government entities. We already mentioned the parliament of owls, but we also talk about a congress of salamanders, party of jays, committee of vultures, convocation of eagles, and to protect them all, an army of caterpillars! And while it’s not known where most of these names came from, you can just envision how some of these were coined as people imagined wildlife in large groups were conferring about the important issues of the day.

Even within a single grouping of animals, like birds, there are seemly endless different ways to refer to them in groups. We typically think of a group of birds as a flock, but when you refer to a group of wrens, they are a herd, and if it’s swallows you see swarming, you should call them a gulp of swallows. The ever common magpie groups into a murder, while in the summertime, we might be more likely to witness a charm of hummingbirds flitting around the feeder. But whether you’re watching a covey of grouse, a gang of turkeys, or a raft of ducks, don’t forget how fortunate you are to be able to see not just one, but multiple amazing creatures in the country we call home. Unless of course you find yourself in the path of a horde of hamsters, then just run.

Jaymee Squires is the Director of Graduate Programs at Walking Mountains Science Center in Avon. She considers herself lucky to occasionally spot a banditry of chickadees in the willows outside the center.