Crafty Coyote: A Colorful Character in all Times 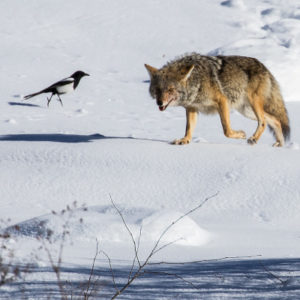 Predator of livestock, pets, and even children on the rarest occasions; the modern coyote has been vilified in Anglo-American culture. Coyotes are the most abundant livestock predators in Western North America, causing the majority of sheep, goat, and cattle losses. But coyotes have worn many faces across time in different cultures.

The coyote plays an important role in Native American creation stories. Smart and adaptable, the coyote is often depicted as a trickster. Despite the devious roles coyotes play, the stories told about them play an important role in many cultures. Their humor often stems from foolish actions that break social norms or traditions. In this way, trickster stories reinforce cultural traditions and values. The following is the Ute Creation Story told by Alden Naranjo, a Southern Ute Elder and member of the Mouache and Caputa bands.

In the ancient times only Sinawav, the Creator, and Coyote lived on the Earth.  They had come out of the light so long ago, but no one remembered when or how.  The Earth was young and the time had come to increase the people.  Sinawav gave a bag of sticks to Coyote and said “Carry these over the far hills to the valleys beyond.”  He gave specific directions Coyote was to follow.  “You must remember, this is a great responsibility.  The bag must not be opened under any circumstances until you reach the sacred grounds.”

“What is this I carry?” asked Coyote.

“I will say no more.  Now be about your task,” Sinawav answered.

Coyote was young and foolish, consumed with curiosity.  “What is this I carry?” he kept asking himself.

As soon as he was over the first hill and out of sight, he stopped.  He was just going to peek in the bag.  “That could hurt nothing.”  He thought.  Just as he untied the bag and opened a small slit they rushed for the opening.  They were people.  These people yelled and hollered in strange languages of all kinds.  He tried to catch them and get them back into the bag.  But they ran away in all different directions.  From how full the bag was after he had gotten it closed he could tell there was only a fraction of what he had started out with.  He went to the sacred valley and dumped them out there.  There was a small number of these people.  But those few ones were the Utes, the real Utes from around here.

Coyote then returned and told Sinawav that he had completed the task.  Sinawav searched Coyote’s face. “I know,” Sinawav sighed.  “You foolish thing, you do not know what a fearful thing you have done.”

Coyote confessed.  “I tried to catch them.  I was frightened.  They spoke in strange tongues that I could not understand.”

“Those you let escape will forever war with the chosen ones, they will be the tribes which will always be a thorn in the sides of the Utes,” said Sinawav.

“The Utes, even though they are few in number, will be the mightiest and most valiant of heart.”

Sinawav then cursed Coyote “You are an irresponsible meddler.  From this time on you are doomed to wander this earth on all fours forever as a night crawler.”

Origin stories like these give explanations of how different things came to be. Stories explaining mistakes made by coyote are normally the justification for bad things, such as the creation of warring tribes. But much like human morality, which coyote often represents, he cannot be pinned as a solely good or bad being. Which is exactly why the coyote is such an interesting character, he tries to be good but gets caught in trouble due to his curious nature.

Austin Balfany is a Naturalist at Walking Mountains Science Center and when not teaching the public about local ecology, he is out enjoying the snow, whatever condition it may be in.