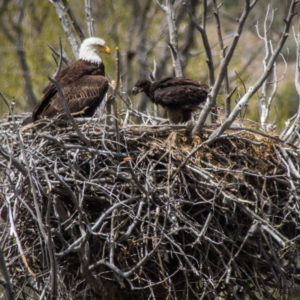 There’s an old folktale I remember from my childhood, about the magpie building its nest. According to the story, the magpie was the only bird at the time who knew how to build a nest. The magpie’s nest was described as a ball of sticks with an entrance hole. I lived on the east coast at that time, and had never seen a magpie, and so I envisioned their nests as a precise balls of twigs, with a neat little opening. So when I first came to Colorado and saw the beautiful, but common magpies with their shimmering iridescent feathers, of course I wanted to see their nests. I have to admit I was a little disappointed when I finally did see the big, sloppy ball of sticks that the magpies call a nest.

Most bird species have a characteristic nest, and you have to wonder how they learned to build it in the first place since birds are hatched in the nest already built by their parents. How do young swallows know to scoop up little pellets of mud in their beaks and to stack the pellets precisely to build a nest? It’s pretty amazing to watch if you ever get a chance, and a single nest might contain more than 1000 individual mouthfuls of mud! The young swallows then line their nest with layers of grass and feathers, sometimes even stealing feathers from neighbors in a colony.

Other birds prefer to nest in tree cavities. We commonly think of woodpeckers as cavity nesters, and local woodpeckers include the little downy woodpecker, its larger cousin the hairy woodpecker, both of which are traditional black and white woodpeckers with highlights of red, and the much larger northern flicker, which is more varied in color. Locally, the mountain bluebird also lives in cavities, which include some of the many birdhouses you see dotting fence posts along open fields.

Birds also have all kinds of strategies for building nests. Some, like red-tailed hawks and eagles, build huge nests and come back to them year after year, adding new twigs and nesting materials so that the nest grows larger season after season. Bald eagle nests break the record, with the largest nest recorded in St. Petersburg, Florida, coming in at 9 ½ feet wide and 20 feet deep! A more typical bald eagle nest, however, is closer to 5 feet across and up to 6 feet deep, still pretty massive for a “treehouse”.

And when you consider the diversity of nests in the bird world, of which I have only just scratched the surface of here, it’s even more astounding that birds know how to build the same nest that their species has been building for eons. In the story, the magpie agreed to teach the other birds how to build a nest, and one spring morning, a crowd of all kinds of birds gathered to watch and learn. But as the magpie demonstrated and explained, the other birds made light of his knowledge, claiming that they already knew this, and they had guessed that much, and so on. And when the magpie got halfway through building the nest, he lost his patience, and said that, if they all knew so much, they could just go build their own nests. And that, of course, is why most birds today build just half of a nest.

This folktale, like most, has an important lesson, but it can also get us thinking about bird nests, something we don’t really think about until we see one. Birds fly away, but since their homes are less portable, nest identification is a great way to begin to recognize different species. And maybe you’ll even get lucky and stumble on a nest full of precious baby birds. Be sure to watch from a safe distance, though, mom and pop are the best ones to take care of baby birds, not humans.

Jaymee Squires is the Director of Graduate Programs at Walking Mountains Science Center in Avon. She likes to try and spot nests now, before the spring leaves hide them away.