Peregrine Falcons, the Bird of Many Contradictions 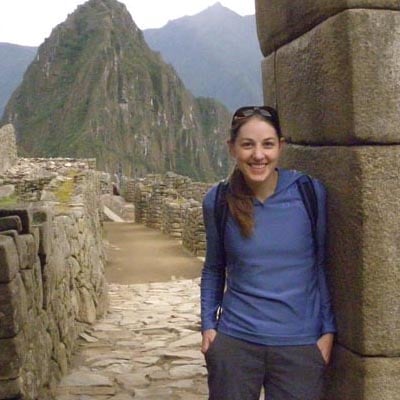 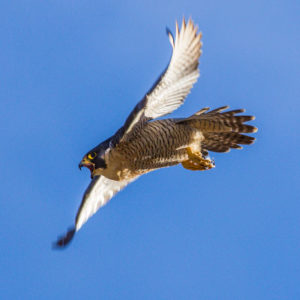 The peregrine falcon is a bird of many contradictions. Officially designated Falco peregrinus, or “wandering falcon,” they are known for exceptionally long migrations, yet have been held captive by humans more than any other bird of prey. They are known to travel as far as 9,000 miles one way from their nesting habitats to their wintering grounds. Colorado-born peregrines are known to travel from New Mexico to as far south as Panama for the winter. Since reintroduction efforts in the 1970s, however, many don’t migrate at all, staying in the city and feasting on pigeons all winter.

Peregrine falcons are at the same time the most revered and most persecuted birds in human history. Ancient Egyptians immortalized these falcons by depicting the god, Horus, with a peregrine’s head. In hieroglyphics, a peregrine was the symbol for “god.” Falconers greatly admired peregrines for their extreme speed, efficiency, and discipline in capturing game birds such as ducks and grouse.

Yet, around the time of the advent of guns, attitudes toward birds of prey changed. In 1718, King Frederick I of Prussia ordered that all predatory birds and animals be eradicated to proliferate hares and grouse for sport hunting. Falcons, hawks, and eagles had become competitors rather than companions of hunters and they were mercilessly slaughtered across Europe for centuries. During World War II, the British Royal Air Force wiped out coastal peregrines to protect the carrier pigeons that were bringing messages from U-Boat patrollers. Despite all this, the peregrines persisted, until they mysteriously began disappearing from most continents in the 1950s.

The story of DDT, and the peregrine’s conservation success story, is now well known, but the sense of dire urgency to save this species has mostly faded from our collective memory. The U.S. Fish and Wildlife Service removed the American peregrine from its list of endangered species in 1999, but peregrines are still threatened by pesticides, poaching, and habitat loss wherever they wander.

Right about now, peregrines are returning to Colorado to reestablish their nesting territories. Peregrines mate for life, returning to the same sites each year to lay eggs. When it comes to nest sites, the more formidable, the better. Cliff ledges give peregrines the height advantage when hunting, defending the nest, and courting their mates. According to local birders, the same pair have been nesting in East Vail since 2010. If they return again, they will scrape out a depression on the hillside and lay 3-4 eggs there. The female will incubate the eggs and stay with the chicks while her partner hunts for the whole family. She will fiercely defend her chicks, but can be startled away from the nest if disturbed by hikers, climbers, or mountain bikers. Leaving the eggs or the chicks exposed to cold or heat for long could quickly kill them.

The ostensive ferocity of a peregrine falcon is softened by their devotion as parents. For months after their young have fledged, or begun to fly, peregrine parents spend all their time with their young, training them how to survive. They gradually stop plucking the feathers of their prey before feeding it to their young, and move on to flying above them at full speed, dropping dead animals in front of them to train them how to catch birds in mid-air.

For peregrine falcons and their admirers, there is a lot to look forward to this spring.  There’s the acrobatic courtship rituals, the astonishing dives at more than 200 miles per hour, and of course the hopefulness that comes with young chicks. We may not necessarily feel the presence of divinity when we see them in contemporary life, but we should at least reflect upon the many contradictory, paradoxical ways that we have treated peregrines over time, and understand that their future is entwined with our choices.

Hannah Irwin is the Community Programs Manager at Walking Mountains Science Center and thinks that you should read “H is for Hawk” by Helen MacDonald.