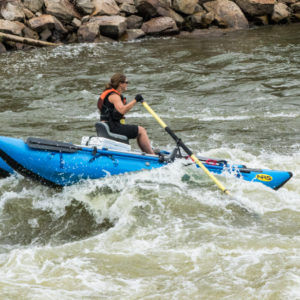 The accumulation of snow over the winter season serves as a natural frozen storage for surface water. The runoff of this snow feeds streams, rivers, and reservoirs throughout the entire year-- water Coloradans use for drinking, growing food, and other typical uses. This means that a low snowpack might result in drought and possible water restrictions during the summer months. In addition to the importance of snow for supplying human needs, snow is also incredibly important for sustaining ecosystems.

The plants and animals in Colorado also are utterly dependent on the snowpack because they need sustained water sources throughout the year. Without flowing streams and rivers, which are mostly sourced by high country snowbanks, wildlife would struggle to find drinking water; aquatic and semi-aquatic species would lose their living space; and plant life would struggle to gather enough moisture to live. In addition, these types of dry conditions create dry vegetation, dramatically increasing the forest fire danger. Without the proper moisture for plants, natural forest fires and accidental wildfires will be more likely during the summers, and we are all familiar with the numerous dangers presented by wildland fires.

This winter Colorado has experienced less than optimal snow conditions thus far. December and January were some of the driest months ever recorded in Colorado, but as the winter has advanced, we have slowly approached annual snowpack averages. Colorado’s snowpack summary reveals that we are at 73% of the normal snowpack during this time of the year. From where we stand now, we would need 199% of our normal snowfall for the rest of this season in order to reach peak levels. While that might be fun to think about, it’s pretty improbable that we will get that kind of snow over the next month. March does tend to be our snowiest month, if you can believe it, so there’s a chance that we will close the gap somewhat, but the forecasts aren’t looking too promising.

Current stream flow is also low within the state, with most rivers running at 50-75% below average. Compare these numbers with this time last year, when local rivers were running somewhere between 110 and 130% above average. What a difference a year can make! When winter snowfalls are low, we become even more dependent on stream flow and spring and summer precipitations.

We have a long way to go if we are going to reach an average winter this year, and the likelihood of even reaching average is growing slimmer by the sunny day, but as we head into the remainder of our snowy season, keep on doing your snow (or rain) dance. The plants, animals, and people of Colorado all depend on it!

Andrew Braker is a Naturalist at Walking Mountains Science Center. He enjoys snowboarding in the winter and fly fishing in the summer.