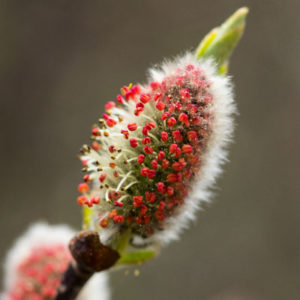 Many people are familiar with the well-known weeping willow, but there are lots of different willows. Willows are most commonly found growing in moist, sunlit meadows and are easily identified by their long, slender leaves that hang down and appear as if they are ‘weeping.’ Willows are a part of the Salicaceae family along with poplar, aspens and cottonwood. You heard that right, willows and aspens are actually very closely related. Species in the Salicaceae family are known for their slender, light colored leaves, along with their weak, pastel colored bark. An interesting fact about the Salicaceae family bark is that it has medicinal and anti-inflammatory properties. The most common species of willow in the Rocky Mountains are the peachleaf willow, mountain willow, Scouler’s willow, and the famous weeping willow. They all look very similar, but vary slightly due to speciation.

During the ski season, admittedly we are not thinking too much about willows or any other type of tree species. It appears that most deciduous (leaf-bearing) trees are still inactive due to the winter season. However, right about now, willows are coming out of their state of dormancy and beginning to prepare for the summer. Willows are an angiosperm, which means they are a flowering plant species, and they have a special kind of flower called a catkin, which aids them in pollination.

When we think of flowers, many of us picture large sunflowers or a rose. But the truth is, not all flowers are large, beautiful and eye-catching. The willow has a specialized flower called a catkin. A catkin is a cylindrical flower cluster with few to no petals. Catkins are found in some other tree species, such as birches, hickories and chestnuts. We have all seen a catkin before, whether you know it or not. They are usually a few inches long and fuzzy, with an off-yellow color. During the spring, they are often mistaken for caterpillars once they have been pollinated and fallen off the tree.

Believe it or not, these funny looking structures are actually flowers! The botanical definition of a flower is the reproductive structure found in flowering plants. People always associate flowers with being beautiful and sweet smelling, often forgetting the entire purpose of a flower is reproduction. Pollination is the process by which pollen is transferred from the stamen of one flower to the pistil of another to allow fertilization to occur. Or in laymen terms: the birds and the bees!

Willows use these catkins to reproduce. Somewhat unique in the plant kingdom, willows are dioecious, meaning the plants are either male or female. Their flowers are pollinated using wind. The wind blows the pollen through the air and the pollen will hopefully land on the sticky stigma. The grain of pollen then travels down the style and fertilizes the ovule. This process happens during the late winter/early spring, before the leaves have even appeared on the willow. Willows are ahead of many other tree species, which have not even begun to come out of their dormancy from the winter season.

Willows are starting to prepare for their summer full of photosynthesizing by getting ahead of the game and reproducing before other trees have even become active. While the winter snow melts away and spring starts to appear, keep a close eye out for the willows and their caterpillar-themed flowers!

Rachel Holland is a naturalist at Walking Mountains Science Center in Avon. Come join her for a nature walk, they leave the center daily at 2pm!