Are You My Mother? The Brown Headed Cowbird 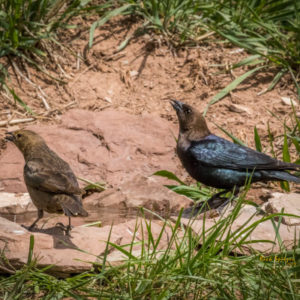 “Are you my mother?” the little bird appeared to say, looking up at the larger bird feeding him small seeds and delicious insects. At this point, the baby bird was naked as a jaybird, so to speak, with nary a feather to foretell his future plumage. But as the days went on, the young chick grew rapidly, overpowering its smaller nestlings and claiming more than its fair share of the food.

In case you haven’t guessed, the baby bird is a brown-headed cowbird, one of the most successful brood parasites in the avian world. A brood parasite is a bird that does not build its own nest. Instead, it lays its eggs, usually 40 or more per individual female, in the nests of other birds. The females sometimes remove the other birds’ eggs, even eating the shells for the calcium it needs to lay its own eggs, and sometimes just knocking them out of the nest to increase the chances that the unwitting mother won’t even notice the difference.

Young cowbirds grow more quickly than most other birds, and this, combined with their short incubation period, gives them an advantage over the bird’s own chicks. A recent study found that cowbirds, compared to another common brood parasite, the cuckoo bird, often allow their nest mates to survive so that their combined calls will convince the mother bird to bring more food. Once their chorus brings the food, however, the larger cowbirds hog more than their fair share, often eating more than 50% of the food with three nestlings in the nest.

Cowbird mothers appear to be both opportunistic and strategic in their selection of hosts for their offspring. There are approximately 220 documented species of birds that have been found to serve as hosts, although it appears that individual mothers target certain species. The host mothers vary in size, ranging from as small as a kinglet to as big as a meadowlark. Common hosts include yellow warblers, sparrows, red-eyed vireos, towhees, and red-winged blackbirds. Cowbirds leave the nest early, sometimes after just 10-13 days, but they depend on their parents to feed them until they are 25-39 days old. It’s quite a sight to see some of these smaller mother birds trying to satisfy their much larger and hungry young!

An interesting question is how these young cowbirds know that they are cowbirds? Shouldn’t a young bird raised by a thrush just assume it is a thrush? Research by Sorenson et al. in 2010 indicates that brown-headed cowbirds rely on a vocal trigger, or “password” that unlocks learning of species specific information upon their first encounter with a member of their own species. It appears that this is mechanism is unique to brood parasites, and probably represents a somewhat unique evolutionary pathways, as this behavior was not observed in ducks that were experimentally placed in another species nest. Apparently the duck mistakenly courted females of the host species instead of its own.

In some cases, brood parasites are described as vicious and part of the dark side of nature. But if you consider it from the side of the cowbird, it’s actually quite a creative and inventive strategy for reproduction. And in return, host mothers have developed quite a range of strategies and behaviors to combat the brood parasites. In terms of the evolutionary arms race, it’s one of the hottest tickets in town. But ultimately, the level of ingenuity is a tribute to the dedication and tenacity of mothers everywhere. Happy Mother’s Day!