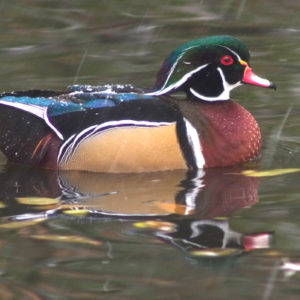 Imagine this, you see a medium-sized, black-and-white waterfowl with a white crescent on its face, bobbing on the surface of Heart Lake (Flat Tops). Suddenly, it dives. What species was that?

Let’s return to our mystery bird. First, consider the dabbling ducks; on water they mainly feed by straining water through their bills for vegetation and invertebrates, and by tipping their bodies to grasp their meals underwater. Chances are you’ve seen a mallard butt waving like a flag in the air while he seeks food from below.

Dabblers can be a tricky bunch to identify. Female dabbler species look similar; and after breeding, males molt for camouflage and look similar to females. However, their speculums are helpful during this time. Speculums are distinct colorful patches on the back of the wings, and speculum color and border differ by species. Luckily, currently males are easier to identify to species as they are in their alternate (breeding) plumage. During this time, dabbler males are a colorful group and include the American wigeon, gadwall, mallard, northern shoveler, northern pintail, and teal (blue-winged, green-winged, and cinnamon).

In this case, the duck dove, and frequently, so it’s not a dabbler. That leaves the diving duck tribes to consider. These sit heavier in the water compared to the dabblers, especially when they are diving as their downy feathers are compressed to reduce buoyancy. Their legs are back near their butts, enabling them to dive and swim as they fish for small animal prey. The tradeoff is that unlike the dabblers, they cannot erupt into flight; instead they need a running start.

Local bay ducks include the canvasbacks, redheads, ring-necked ducks, and lesser scaups. Patterns of male bay ducks are generally more somber, consisting partially of black and/or dark red tones. However, our striking mystery duck does not match the shape or patterns of any of these males.

What about the mergansers and sea duck tribe? Of the three-merganser species, the only Colorado breeder is the common merganser, and the male has a mostly white body, green head, and long red bill. Though handsome, this is not our duck.

Of the sea ducks, the tiny diver you just saw may be a male bufflehead, distinguished by its mostly white head and body, or a male goldeneye (common or Barrow’s). The common goldeneye doesn’t breed in Colorado, and the male has a rounded white spot on its cheek (compared to a crescent on the Barrow’s). Before we look at the Barrow’s though, there’s the last tiny diver, of the stiff-tailed tribe, the ruddy duck. The males have blue bills in breeding plumage and stiff rudder-like tails. This diver is bigger though and lacks the stiff tail, ruddy (reddish) coloration and a blue bill, so it’s not a ruddy.

Instead, our diver has a dark head and back with a white crescent behind its bill, and looking again we can see the distinct, golden eye; it is indeed a Barrow’s goldeneye! This long-lived bird is a White River National Forest Sensitive Species due to its small breeding population in the Flat Tops. Look for a female nearby- chances are he’s part of a nesting pair.

Jen Prusse is a volunteer at Walking Mountains Science Center in Avon, and she enjoys rock climbing and hiking with her husband, Brent, and their dog, Tim, and generally spending time outside and learning more about the natural world.