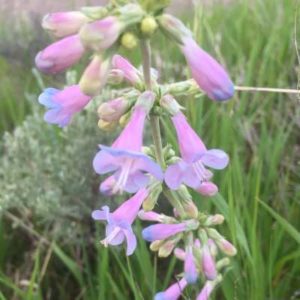 “Harrington’s penstemon!” I call to my friends. I stop the truck. It’s late May, and I have been driving slowly in a sage-oak plant community south of Eagle. Our quest: to find wildflowers. Upon closer inspection, the two exerted stamens confirm it is indeed a Harrington’s. This half-foot-tall hyper-color purple penstemon is uniquely endemic to Eagle and surrounding counties. I love wildflower season. With the early spring green-up, Colorado has sloughed off its dreary brown landscape for a verdant and colorful one.

On well-drained soils, often in the sagebrush, the first sign of spring shows itself with the blooming of the pasqueflower. This short, fuzzy purple forb flowers from April into June. Like any wildflower, it blooms later at higher elevations. Although a buttercup, it could be mistaken for a member of the Dr. Suess family, with zany, fluffy seed tendrils that spiral outward from the plant center and later blanket the soil. I’ve seen prairie smoke (or old man’s whiskers) near the pasqueflower. Prairie smoke transforms from a pink and white gumdrop to a similar cartoon-like seed head; as does the sugarbowl clematis. When encountering said species, I often spot penstemons nearby.

Unlike the lone Harrington’s, the dusky penstemon, a melancholy, dark purple flower with silvery hairs, occurs in clusters in a variety of habitats, from meadows to roads. Like any penstemon, it has two petals on top, and three on the bottom (five petals overall, hence “pent”). This petal arrangement provides a welcome landing pad for insect pollinators.

Aside from the penstemons, pollinators such as bumblebees will also seek out nectar and pollen from forbs that are toxic to us vertebrates, such as monkshood and larkspur. Curious naturalists, beware! The monkshood genus, Aconitum, literally means “unconquerable poison.” It’s generally not safe to touch this plant without gloves. While monkshood and larkspur flowers attract bumblebees, the western bumblebee tends to bite the hood or spur to rob the nectar inside, thereby cheating the pollination process.

Bumblebees also visit elephants… of the herbaceous variety. The elephanthead, aptly named, is an awe-inspiring spike of pink flowers, found in wetlands and riparian areas in lush numbers. Aside from bumblebees, some flowering plants have co-evolved with other pollinators. For instance, each scarlet gilia plant (or skyrocket) contains several long, tubular flowers. With the tubular design, the red versions attract hummingbirds, and white varieties - moths. The scarlet gilia will persist as a basal rosette with a long taproot for one to several years. Then, as a brief beauty, it will flower and die.

This scenario is comparable to that of the monument plant, or green gentian, which can persist for 20 to 80 years in a leafy form before flowering. Monument plant is often found on grassy, sunny hillsides, alongside the mariposa (or sego) lily. The mariposa lily is a single-stalk, tulip-like white flower, with contrasting yellow anthers and purple nectar glands inside. The bulb is edible, and reportedly saved the lives of early pioneers.

Sunny and moisture-rich areas provide the perfect growing conditions for wildflowers. Among the best places to find wildflowers include the Flat Tops in July, the Piney River Valley, aspen groves, and any trail in the wilderness.

If you find a mystery wildflower, take photos! Sources such as www.swcoloradowildflowers.com, or the app version, “Colorado wildflowers,” will help you key it to species. As we enjoy summer in the Vail Valley, the wildflowers do as well. They take advantage of this brief season to grow, bloom, attract pollinators, and go to seed. These ephemeral beauties brighten our days in their efforts to survive and persist for generations to come.

Jen Prusse is a volunteer at Walking Mountains Science Center in Avon. She enjoys rock climbing, kayaking, and exploring the natural world with her husband, Brent, and their dog, Tim.