Humans Aren't the Only Evacuees During Wildfires 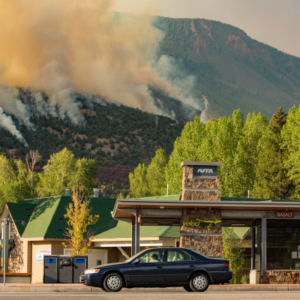 Remember Bambi? Most of the movie included picturesque forest scenes of flowers and friendly skunks, but towards the end, there was that chaotic scene where fire spreads through the forest and the animals flee. Bambi and his father barely escape the fire, running through rivers and dodging burning embers, and finally join their friends (and Bambi’s love, Faline) on a small island in true Disney style. Bambi (the movie, not the deer) and his friend Smokey the Bear have been accused of impacting decades of attitudes and actions about wildfires, and that may be true to some extent, but there are a few things they both get right.

By this time, most of us understand that fires, while they can be dangerous and destructive, serve an ecological purpose. And even in Bambi, after the fire we start to see some of the regrowth in the forest almost immediately as the bright Disney flowers bloom in the ashes. But if you’re wondering about the animals, Bambi got that (at least partially) right too, in that most animals simply flee from fire in any way they can, by wing or by hoof. Now this, of course, presents other problems, and it’s been documented that predators sometimes take advantage of these fleeing masses of prey. We didn’t see this in Bambi.

After the huge fires in Yellowstone National Park in 1988, some people thought that the park, closed in its entirety for the only time in its history, would be littered with animal carcasses. But as it turns out, of the park’s estimated 40,000-50,000 elk, only about 345 elk carcasses were lost. Beyond this, they documented the loss of 36 mule deer, 12 moose, 6 black bears, 9 bison, and 1 grizzly (out of 21 radio collared grizzlies). And while exact counts weren’t made, it was hypothesized that rodents suffered the highest losses, partly due to their tendency to burrow into the ground to escape the flames, and partly due to increased predation from the loss of vegetative cover directly after the fire.

So what about plants? Does anyone feel badly about the loss of beautiful wildflowers or statuesque trees? You needn’t. Plants with shorter lifespans that depend on the regular sprouting of seeds simply weather the fire as seeds, stored in various places in the soil bank. Many other plants are capable of re-sprouting from root stocks, also buried in the soil. And of course, there are the famous, fire-adapted species that actually depend on fire to reproduce, like our local Lodgepole Pines. These trees use the heat from the fire to melt away the wax that holds their cones closed, allowing the seeds to take root in the fresh, fertile ash with very limited competition from mature trees.

So while fire is natural and all that, it’s still fairly scary and potentially life threatening, especially for us feeble humans that are less equipped to flee from the fire on our own. And I would be remiss if I did not mention that, even in the movie Bambi, it is Man who starts the fire. So in these dry days where fires are already blazing, let’s all be careful to make sure that we don’t add to the problem. Be safe with fire and when in doubt, don’t. And finally, just a word of thanks to all of the First Responders out there who are saving homes and keeping people safe. We appreciate you and the work that you do and the sacrifices you make. Thank you.

Jaymee Squires is the Director of Graduate Programs at Walking Mountains Science Center in Avon. She is missing campfires this summer, but happy to do her part, and enjoying dark views of starlit skies.