What is a Grebe? 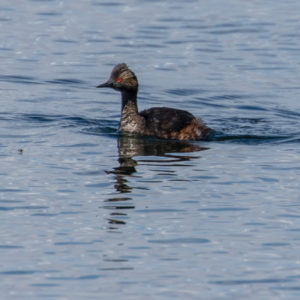 You’re out enjoying an evening on the lake when you notice a strange bird floating along the surface of the water. It’s not quite a duck, too small for a goose, and more awkward than a graceful heron. As you strain your eyes to get a closer look, the mystery bird disappears beneath the surface, reappearing a few moments later in another area of the lake.

The bird you spotted may belong to the Grebe family. While they may look a little like ducks when sitting on the water, grebes are easily identified by their quirkier features: fluffy heads, legs near their rear, and the occasional bright red eyes in some species. The four species we have the chance to spot in the Rocky Mountains include the Western Grebe, Clark’s Grebe, the Eared Grebe, and the Pied-billed Grebe, all of which except the Pied-billed have ornate head plumages and vivid red eyes.

The scientific name for the Grebe genus, Podicipediformes, is Latin for “feet at the buttocks”, an apt descriptor for the grebe’s posteriorly-located legs that allow them to dive deep into water. While many of us enjoy swimming in our local waterways for recreation, grebes have evolved as expert swimmers in order to obtain some of their favorite foods: fish and aquatic invertebrates.

Swimming is about the only thing these birds are built to do well, as the location of their legs makes walking a challenge and their smaller wing size leaves many grebes flightless for the majority of the year.

If you spend your free time watching nature documentaries, you may have already seen the claim to fame of many grebe species. When mating season comes around, both male and female grebes will perform an intricate courtship ritual. Locally, western grebe pairs will woo each other with elegant head swaying performances that end with both birds turning and propelling themselves upright across the water, appearing to run on the surface of the water.

These mating displays usually result in anything from 1-10 eggs (depending on the species) in floating nests held up by underwater logs or vegetation. After hatching, grebe chicks will hitch a ride on the backs of mom or dad, while the other parent goes out searching for food. As anyone who has given a piggyback ride to a child knows, it can be tiring work after a while. When the parent starts to get tired of their hitchhikers, they simply flap their wings to lift themselves upright in the water, dumping the chicks off their back. Usually, the other parent is nearby to help the chicks up onto their back, taking a shift as the family minivan.

While our four local grebe species are marked as low conservation concern, it’s still important to protect the habitat of these birds. Without our local wetlands, there would be less safe places for grebes to build their nests and perform their elaborate mating rituals. Additionally, grebes can become entangled in trash in or near a body of water, particularly fishing line, which may hamper their ability to swim down for food. By keeping our wetlands clean and healthy, we can keep these charming birds around for many generations to come!

Haley Baker is a Backcountry Interpretive Guide at Walking Mountains. Her hobbies include hiking, rock climbing, and watching YouTube videos of grebes trying to walk.