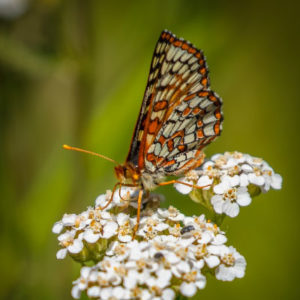 Have you ever wondered how certain animals get their names? I was asking myself this very question the other day after I heard the strangest animal name yet - Wunderpus photogenicus. Turns out, that this name belongs to a creature under the sea. The wunderpus photogenicus is an octopus that lives in coastal waters near Indonesia and Malaysia and can change its color and shape to imitate other sea creatures. The spots on individual octopi are unique, so photos can help researchers identify specific individuals. Also, the German word "wünder," which means to "marvel" or "wonder," is also responsible for its name. Not all animal names come about this way though.

Some animals are named based on what they resemble, like the Fried-egg Jellyfish. These jellies consume zooplankton and smaller jellyfish. Sea turtles have been seen consuming these breakfast looking creatures, although I am sure the taste is a little different – and that is no yolk! Another animal named for what it looks like is the tasseled wobbegong, a species of shark that looks like a carpet or like it has a beard. In the language from the native people of Australia, wobbegong means "shaggy beard." The tasseled wobbegong sharks do have whiskers, or barbels, around their face and the sides of their heads which help them search for food.

Naming an animal based on how it looks is quite common, but some animals are named based on a sound they make. "Dik-dik" is a sound you may hear if you happen to find yourself exploring South Africa and surrounding areas. A Dik-Dik is a small hooved animal that lives in dense forests to open plains. At full grown, these little herbivores stand at about 14-16 inches at the shoulder. Dik-diks may be small, but they can run up to 26 miles an hour!

But the most interesting way, and sometimes the most entertaining way, for an animal to receive a name sometimes comes from the person who discovers it. There is a species of spider that has the nickname Sparklemuffin, fondly given to it by Maddie Girard. Maddie is a Ph.D. student studying at the University of California, Berkeley, who discovered the new species of peacock spiders. These spiders are only found in Australia and are known for their beautiful coloration and their epic dance moves. Male spiders will approach a female and lift their legs like a ballerina and wave them around in her face. If the female is interested, she will approach and the male spider will start to shake and roll and use the flaps over his abdomen and wave them around. I highly recommend searching “dancing spiders” on YouTube to watch these Sparklemuffins!

Our last animal was not named because it looks like something or sounds a certain way but because the researcher responsible for discovering it had an appreciation for a certain actress. Carmenelectra shechisme (pronounced “Carmen Electra she-kiss-me) is an extinct fly that was discovered by Neal Evenhuis in 2002. The fly was found in a bit of amber and is extremely small at about 1-3 millimeters long. It is said that Neal tried to contact the model/actress to let her know that she would be immortalized in science forever but has not gotten a response. We will keep our fingers crossed for him!

There are still other curious ways that animals get their names, and if you find a new species, then it’s up to you! Will you name that new species based on how it looks or sounds, or would you be more creative and name it based on something from your favorites list – maybe a favorite food or a favorite trail? The possibilities are virtually endless.

Breanna Sayers is a naturalist at Walking Mountains Science Center in Avon and she originates from Wichita, KS.