Martha, the Last of the Passenger Pigeons 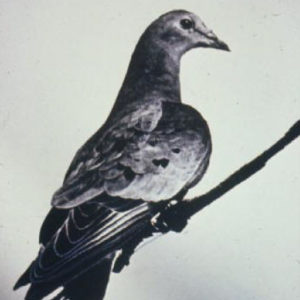 On September 1st, 1914, a legend passed in the aviary at the Cincinnati Zoo. That legend was a single pigeon, named Martha, after George Washington’s wife. Martha was the last of her kind, and with her death, the passenger pigeon became extinct.

The passenger pigeon, not to be confused with the domesticated homing pigeon, was a species of pigeon native to the Eastern United States. Once reported to be the most common bird, the species declined rapidly in the early 1900s and disappeared entirely with the death of Martha. Some ornithologists, scientists who study birds, estimated that in their prime, passenger pigeons made up about two out of every five birds. Many historical journal entries tell tales of migrating flocks one mile wide blocking out the sun for hours!

If the passenger pigeon was once so prolific, what must have gone wrong to make the birds die off so fast? The short answer is humans. Passenger pigeons traveled in huge flocks for centuries because the larger numbers meant there were lower odds of any one pigeon being picked off, a technique called “predator satiation”. However, this adaptation is only advantageous until humans with nets, poles, and guns get involved.

Passenger pigeons were seen as pests for the after effects of their migrations, easy to catch, prolific, and tasty enough to be appealing to both the underclass and the elite. This combination means that when the location of a nesting flock was found, hunters would quickly arrive in the area to kill and ship off as many barrels of pigeons as possible. For a while, it seemed as though the hunting wouldn’t disrupt the pigeon population as their numbers had barely declined.

Numbers can be deceiving, though, as years of disrupted breeding meant that almost all of the population was growing older and older with no young to replenish the flocks. Therefore, the continued pressure on the population eventually led to a sudden population crash. The last confirmed wild passenger pigeon was shot in 1901, leaving the population extinct except for those in captivity.

The sudden decline of the passenger pigeon got people’s attention, and soon legislation was being passed to protect migratory birds as well as their nests, eggs, and feathers. The 1970s brought an even larger explosion of environmental legislature. The Endangered Species Act, passed in 1973, was part of a worldwide effort to add protections to endangered populations. Later, the IUCN Red List was developed as a global way to evaluate and guide the conservation of both plants and animals. The IUCN Red List categorizes species as Least Concern, Near Threatened, Vulnerable, Endangered, Critically Endangered, Extinct in the Wild, and Extinct.

Despite passenger pigeons’ sad end, Martha has been well taken care of in her time after death. Immediately after she was found, she was packed into a 300 lb block of ice and shipped to the Smithsonian in Washington D.C. where she was mounted and displayed through the 1950s. Since then she has been protected in a locked box in the special collections area of the Smithsonian (though her internal organs are stored in an entirely different section).

Martha has made several flights since her death- to San Diego and back and then for a brief return to the Cincinnati Zoo to be displayed in a new exhibit in her name. For both of these trips, Martha flew first class with an escort- quite the upgrade from the crowded migration flights of her ancestors.