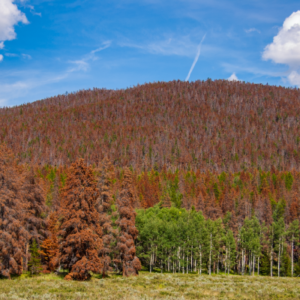 We tend to think of disturbances as bad, and in nature, they can often be “bad” or destructive, especially in the short term. But over the long haul, disturbances can actually be integral to the health of an ecosystem.

The forests in Colorado are characterized as being disturbance driven, meaning the diversity of species, and therefore the health of the forest, is reliant, in part, on destructive events such as wildfires. Past suppression of fires, along with local pest outbreaks like those from pine beetles, has created a situation where we now have ample grounds where forest fires can spread. Influenced further by the drought, we have seen hotter and harder to manage fires in our wilderness. The current destruction caused by large scale forest fires in Colorado is not normally characteristic of these lands. The norm is more common and less intense fires, which allows for pioneer species, such as fireweed and berry bushes, to flourish as our soil is replenished with nutrients from burns.

As is apparent when looking to our forested mountains, the pine beetle was able to feast on our trees over the past years. The stands of ghost-like trees among our lush green lodgepole pines are a constant reminder of the environmental problems our state faces. As our winters are becoming warmer and the snowpack lessens, the native pine beetle has experienced lower rates of winter die off. Winters need to be cold and long to cause the death of pine beetle larvae, but without these conditions, their population has thrived. These climatic changes have led to real changes in the vegetation within our valley and state. Since the beetles are native to Colorado, there is not too much we can do from a conservation standpoint. Beyond the pine beetle, there are other beetle species attacking limber pine, ponderosa pine, spruces, and others.

The pine beetle itself is not what ultimately kills our lodgepole pines, but instead, it is the fungus that is carried into the tree by the beetle to feed its larvae. Some work is being done, and on small scales, we have been able to protect certain stands of trees deemed important for beauty or the integrity of the soil. Another tactic that has actively been used in an attempt to save our important forested areas is spraying of carbaryl. This is a type of chemical that has been shown to have an effect on reducing the number of trees that are affected by the beetle. The chemical is not a long term solution to the problem, and limited testing has been done on the effects of carbaryl on other parts of the ecosystem.

However, the solutions that are being pursued to address the beetle problem are only tackling a symptom of the larger problem. The pine beetle is just one pest that appears to be thriving in the environment created by our changing climate. If we consider the pine beetle outbreak as an indicator of what our future could look like, we might think about developing better strategies to better combat climate change now.

Chloe Hedrich is currently a naturalist for the summer with Walking Mountains Science Center. When she returns home, she will be a Junior studying Environmental Science at Springfield College in Massachusetts. She enjoys learning about the diversity of ecological issues different parts of the country are facing in hopes of solving them.