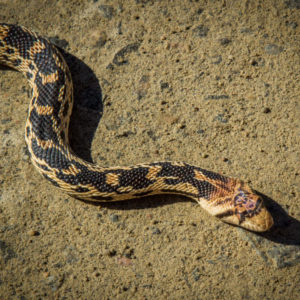 What is your first reaction to seeing a snake? Most will run or become startled --but I encourage you to admire these creatures from a safe distance and I’ll tell you why. First, snakes are vital to the functionality of our greater environment and food webs. They do this by acting as some of Colorado's top predators! But don’t worry, they are not interested in eating you or your pets.

Snakes generally prefer smaller mammals such as voles and field mice --animals that would proliferate if gone unchecked by our snake allies. Snakes also help us in fighting disease. For instance, The University of Maryland credits a decline in cases of Lyme Disease to the fact that snakes consume so many infected rodents and do not become infected by the disease themselves. Conversely, areas where snake numbers have drastically declined due to human killings have experienced an increase in sicknesses. How do snakes hunt all of those pesky rodents? With their amazing senses!

Snakes do not rely heavily on eyesight (they cannot see far distances) or hearing (they lack outer ears) but rather accomplish predation through smell and touch. Snakes will use their tongues to smell--which is why they stick them out so much. Their tongues themselves only have a few taste buds and it is used rather to transfer molecules from the air to a snake's Jacobson's Organ (pictured). The Jacobson's Organ is located by the roof of a snake's mouth and it contains hundreds of nerve endings that are extremely sensitive to odors. A snake will stick it tongue out and collect a bunch of smelly molecules and then put their tongue back in and up against their Jacobson Organ. This interaction allows snakes to follow a scent. The reason that snakes have forked tongues is so they can figure out the exact direction (left, right, center) of a certain odor. Another way in which snakes understand their surroundings is by feeling vibrations through their scales. By absorbing the vibrations around them, snakes can gain an idea of the size or speed of an animal and respond accordingly--most of the time this involves fleeing and hiding.

So what about snakes in Colorado? There are about 28 different species and only 3 are venomous. (Important side note: snakes and other animals that inject venom are venomous while organisms that will harm an individual once consumed are poisonous, like mushrooms) The only species that can be harmful to humans are rattlesnakes--the western rattlesnake, midget faded rattlesnake, and the massasauga. So you will have an audible warning if you get too close to one--which is pretty considerate if you ask me! Many of the non-venomous snakes here, such as the lovely common king snake, eat venomous snakes and will not feel the impacts of the venom, so they help keep those populations in check. In Vail, you will mostly see wandering garter snakes. These snakes are the only snake found above 8,000 feet and can live in altitudes up to 13,000 feet! They inhabit areas around water because they prefer moist soil to moderate their body temperature. Only ranging 20-40 inches in size, these tiny critters are nothing to be afraid of. They eat a variety of insects, eggs, and small animals--especially rodents. They are also among the 30% of snake species that give live birth rather than laying eggs--which is really pretty unique.

I encourage you to appreciate snakes for how important and incredible they are and become familiar with all of Colorado's amazing native species. Here is a link to start exploring: https://www.coloradoherping.com/species-guide.html

Tessa Cafritz is a naturalist at Walking Mountains Science center. She has always had an appreciation for all walks of life and recently grew a special love for those who slither. In this article, she shares some of the ways in which snakes help us, how snake senses are special, and important information for admiring the snakes found here in Colorado.