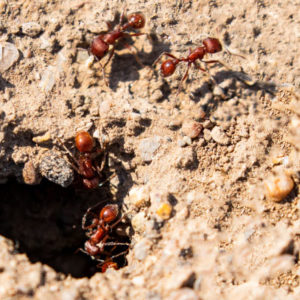 He gave a voice to the small, and shined a light on science that revealed new ways to approach how we see the natural world. Summing up the influential life he leads, as well as the astonishing work he has done, is quite a challenge. Edward O. Wilson is known as one of the world’s most profound scientists, notably for his work with ants.

Wilson was born on June 10th, 1929 in Birmingham, Alabama. He comes from a strong educational foundation, receiving his B.S. and M.S. the year after, in Biology from the University of Alabama. He continued on, earning his doctorate in Biology from Harvard in 1955. His dedication to learning more about the natural world didn’t stop there, and he later became a professor for Harvard and Pellegrino University. Wilson’s strong pursuit for knowledge couldn’t even be quieted by the physical obstacles he faced. His depth perception was damaged as a result of a childhood fishing injury, followed by the onset of partial deafness. These challenges deterred him from pursuing his interest in birds, but he instead focused his pursuits on entomology (the study of insects).

Throughout his life, Wilson has made a series of important discoveries. In his first major work, The Insect Societies (1971), he presented a detailed framework on the ecology, population dynamics, and social behavior of thousands of insect species. In his second major work, Sociobiology: The New Synthesis (1975), Wilson proposed that animal societies have fundamental biological principles that apply to humans as well. His thesis was criticized by many different scholars and researches. However, he continued his work, theorizing that only 10% of human behavior is genetic, whereas the rest is due to environment. Later, the officers and fellows of the International Animal Behavior Society ranked Sociobiology as “the most important book on animal behavior of all time.”

Although Wilson is well-known mostly for his work with ants, earning him the nickname “Dr. Ant,” he also made many important contributions and discoveries to our understanding of the human experience. Applying knowledge he gained from observing the natural world, he was able to build a bridge of commonality between the nature of other animal species and ourselves. Travelling around the world, Wilson would lecture and continue his studies on native species. Wilson also dedicates his time towards protecting and preserving the world’s biodiversity. He played a major role in establishing the Encyclopedia of Life, a webpage that lists all of Earth’s known species, promoting the protection of the world’s major hubs of biodiversity.

Besides writing and lecturing, Wilson has also received over 150 awards around the world in science. In 1955, Time Magazine named him one of the 25 most influential Americans, and in 2000, both Time and Audubon magazine selected him as one of the century’s 100 leading environmentalists.

Wilson’s work provides a prime example of the value of learning from the environment around us. If Wilson’s story has intrigued you, I encourage you to go a step further. Wilson’s Letters to a Young Scientist, published in 2013, gives insightful advice on how to encourage your own inner scientist. This book was written to evoke inquiry into the mysteries of life, to entertain us with stories from Wilson’s own explorations and adventures, and to inspire future scientists on their own paths. Where will it lead you?

Iza Ruffino is a Naturalist at Walking Mountains Science Center in Avon, she enjoys long walks in the forest under the moonlight.