How to Watch the Geminid Meteor Shower 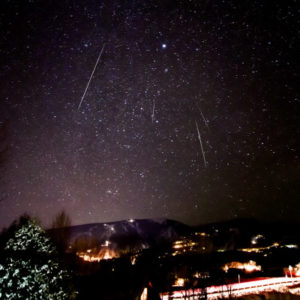 Have you ever looked up at the night sky and seen a bright light streaking across a background of twinkling stars, only for it to disappear as you frantically try to point it out to your friends and family?

Glimpsing something as fleeting and beautiful as a shooting star is an incredible experience. But just what is it you’re seeing? What are shooting stars?

To the Chumash people of California, shooting stars are alakiwohoch, a person’s soul on their way to the afterlife.

To the Hopi Pueblo people of northern Arizona, they are sohuluquu – star people who fall to earth when they get married.

And to the Diné (Navajo) of northern Arizona and New Mexico, shooting stars are so’hidilyeed, “stars running after each other,” and they’re considered bad omens. It’s taboo to watch a shooting star, but if you accidentally see one, you can keep misfortune from befalling you by blowing in the direction of it.

Throughout human history, civilizations all over the world developed different explanations for the breathtaking phenomena we know as shooting stars. These are only a few examples from the mythology of indigenous people here in the United States.

In western astronomy, we have an explanation for them as well: we call shooting stars meteors. Meteors are the actual streaks of light in the sky, made by objects the size of a grain of sand burning up in our atmosphere. Meteorites, on the other hand, are what we call pieces of rock that survive their entry through our atmosphere and eventually fall to Earth. These objects are debris left behind by chunks of rock and metal that we call meteoroids, or asteroids, which leave a trail of dust in their wake as they orbit the Sun.

Why does any of this matter? Well, look up in the sky late at night this week and you’ll see for yourself! The Geminids meteor shower peaks on Thursday – and with an average of 120 meteors per hour, or two per minute, the Geminids put on one of the best shows of any meteor shower throughout the year. You won’t want to miss it!

The meteors in the Geminids shower appear to radiate from the constellation Gemini, visible to the southwest in the December night sky, but they actually come from an asteroid named 3200 Phaethon. The Geminids shower has occurred every December for the last 200 years or so, but consider yourself lucky to be seeing it now; when it was first recorded back in the 1800s, there were a mere 20 meteors per hour. Over time, the gravity of Jupiter has pulled the debris left by 3200 Phaethon closer to Earth, so our planet orbits through more and more debris every year. We have Jupiter to thank, in part, for such an incredible meteor shower!

The best time to view the Geminids this year will be after the moon sets around midnight on December 13th and 14th. You may want to wait an hour or two after moonset, to see the meteors against as dark of a sky as possible, but if you aren’t a night owl, not to worry! Although the shower won’t peak till about 2 a.m., it will become visible by 9 or 10 p.m. So grab a warm blanket or a sleeping bag, head somewhere away from the city lights, and settle down to enjoy the show!

Heidi was a summer Naturalist at Walking Mountains Science Center in Avon. She is passionate about ethnoastronomy and dark skies, and enjoys hiking and slacklining in her free time.