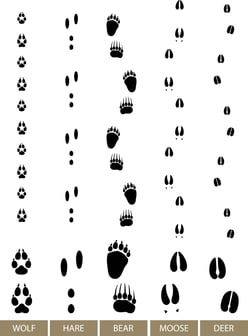 While it sometimes seems that winter is a quiet time in terms of animal activity, wildlife abounds all around us. It is true that many Eagle River Valley animal residents are hibernating or have migrated to warmer climates for the winter. Many others have adapted to tolerate and withstand the harsh winter conditions while staying active year-round. Although we may seldom see them, evidence of their presence and daily activity reminds us that they are here enduring the cold winter months with us.

There are many signs a careful observer in the forest may note that indicates the presence of an animal. These include animal feces or scat and urine, chew or claw marks on trees, dens or bedding sites, hair, feathers, and trails commonly traveled by animals. However, the most noticeable sign of wildlife, particularly evident during the wintertime when snow blankets the ground, are footprint tracks. Tracks left in snow, sand, or mud after an animal has passed through are great lasting indicators of an animal’s presence.

There is a story behind each set of tracks seen in the snow. We can learn a great deal about an animal’s life from the tracks they leave behind. We can determine the size, family type, and often species of the animal. We can follow the tracks to identify where an animal is nesting or hiding. We can discover who is living in a specific area or recreate the scene of a hunt where a predator’s tracks are close behind its prey’s, revealing who is eating whom in the forest. 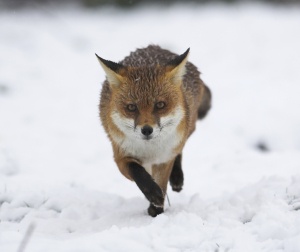 Just as we leave different tracks in the snow with our boots, skis, snowboards, and snowshoes, different animals leave distinguishable tracks on the ground. When tracking an animal, using its footprints to find or identify it, there are a few helpful hints to remember. Deer, elk, and moose leave hooved images in their footprints, but fox, coyote, bobcat, and mountain lion have distinguishable pad shapes in their prints. Small mammals’ tracks may look like clusters in the snow and sometimes tail or belly marks are also visible.

Tracks in snow appear in a series as animals walk or run. There are four pattern categories that different types of animals make. A track pattern is the general arrangement of prints which can be attributed to the body type of an animal and how it moves across the ground. Animals that have a similar body type, such as a coyote and red fox, fall under the same track pattern category. They, along with the bobcat, lynx, deer and elk, belong in the Steppers group. Their tracks are recognizable by the zig-zag pattern their footprints form on the ground.

The deer mouse, red squirrel and snowshoe hare all leave similar track patterns in the snow, fitting in the Hoppers group. Generally, all four footprints are close together, the two larger hind feet can appear ahead of their smaller front feet. The weasel, marten and mink fall into the Bounders category. They leap or bound through the snow, hind feet landing in the tracks of their front feet so their trail appears as a line of twin prints. Lastly, the bear, porcupine and beaver belong in the Waddler group. There are often drag marks of their feet in the snow, sometimes connecting one print with the next. In deep snow a wallowed trough is often formed.

It is important to keep in mind the type of habitat where a set of tracks is found. This can help us decide which animals’ tracks we are observing. For example, both the mink and marten are Bounders and leave similar tracks, but the mink lives near waterways while the marten usually resides is forested areas. When you observe a set of animal tracks in the snow, study them and then follow them to see where they go, you never know what you will discover!

Author Caitlin Rex is a former Winter Naturalist at Walking Mountains Science Center. If you are interested in seeing and learning more about animal tracks, please join a Walking Mountains naturalist on a free snowshoe tour departing from the Nature Discovery Center on top of Vail Mountain everyday at 2pm!