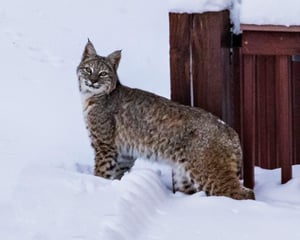 Do you have a pet dog at home? What about a pet cat? These domesticated animals are our furry friends and cozy companions. But did you know that their wild counterparts are some of our neighbors here in the Eagle Valley? They may be less cuddly and more ferocious, but wild felines, including bobcats, mountain lions and lynx, call the Rocky Mountains home, too.

Wild cats are among the most elusive animals in our region. All three species of cats are crepuscular - they are most active in the evening, hunting and roaming as the sun sets. Bobcats and lynx are about the same size, but lynx can be distinguished by their larger, snowshoe-like paws, distinctively bushy tufts on each ear, and thicker coat of fur. Both cats are grayish-tan with black-spotted coats.

In comparison, mountain lions are much bigger than bobcats or lynx, and are entirely tan at maturity. Mountain lions are considered more dangerous to humans and can be a concern for those raising livestock or with pets. Although it is a rare occurrence, they have been known to target joggers, mountain bikers, and children, particularly in the early morning or late evening, when these cats are most active. Bobcats and lynx hardly ever come into contact with humans, and it is quite uncommon for them to be aggressive in case of an encounter. Despite the fear surrounding wild cats, especially mountain lions, it is still extremely uncommon for mountain lions and other wild cats to harm humans, as they prefer to be left alone to hunt and patrol their large territories.

Mountain lions play a crucial role in their ecosystem, that of the apex predator. Apex predators are on top of the food chain - they hunt other animals as their prey, and they do not have any animals that eat or attack them, apart from humans. Without apex predators prowling about, the populations of deer, rabbits and other snack foods for these cats would explode, upsetting the balance of the ecosystem. It isn’t easy to be a predator - these cats work like Olympic athletes, performing supernatural feats to get dinner on the table.

Even the best hurdler on a high school track team has nothing on the mountain lion, which can scale a tree as high as 15 feet with a vertical jump, and can bound an impressive 40 feet while running! Bobcats can almost match the mountain lion in its jumping skill, despite its smaller size. Barely twice the size of an average house cat, bobcats have been known to catch prey larger than they are, stalking their target until they are close enough to deliver a death pounce as long as 10 feet. Not to be outdone, a hunting lynx can spot its prey from as far as 250 feet away, even a small mouse - although its preferred food is the snowshoe hare. Those dark tufts you see sprouting from the tips of lynx and bobcat ears aren’t just cute, they also help them hear extra well.

A run-in with a wild cat in Colorado is rare, but we can appreciate their power and crucial role in the Rockies’ ecosystem nonetheless. Next time you’re scratching your pet cat’s head, think about his distant cousins, the mountain lion, bobcat and lynx, who are prowling the forest not too far away. Just because we don’t see them very often doesn’t mean they aren’t there.

Hannah Taub was an interpretive naturalist with Walking Mountains Science Center this past summer. Stop by our visitor center in Avon for a free nature walk at 2pm daily.