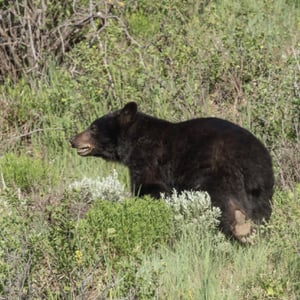 Leaves shudder in the wind, a cool gust interrupting the warm autumn sun. The yellow canopy of an aspen grove transforms the piercing sunlight into a golden glow. Down the hill, a neighboring clone of quaking aspen hasn’t fared so well. Here the wind whistles through a barren grove—each tree a pale skeleton of its former self. High in the canopy, a lone leaf wavers.

Just weeks earlier, this same leaf displayed a markedly dissimilar appearance. Glowing green pigments gave it purpose, one member of a lush sugar-making machine. Now, only hints of green chlorophyll remain along its veins. The summer warmth has once again succumbed to shortening days. Frost glistens in the mornings. It is too challenging and inefficient for the aspen to maintain its green facade. Previously hidden behind these green hues, yellow carotenoids and red anthocyanins reveal themselves. However, these too will soon fade. The wind gusts. The leaf lets go, ready for winter.

A mother black bear and her cub amble through the grove. The first snow may fall tonight, but the coming cold is not their concern. Fat and full from a fruitful summer, the pair is prepared. Still, the aspen’s leaves have turned, grasses are brown, and any remaining thimbleberries have lost their sweetness. Food is scarce. It is time for an annual pilgrimage. Their destination is the shelter of ancient fallen fir, hidden in the shadow of a cool ravine. The pair moves almost silently, if not for the rustle of a golden leaf. In a few short weeks the father will join. During their torpor, body temperatures will drop, hearts will beat at a fraction of their former vitality, and the family will wait. They will wait seven long months to awake, having lost nearly a third of their autumn mass. They will wait, dreaming, perhaps, of the rebirth of an aspen’s leaf, ripening thimbleberry, and their summer feast readying for winter.

The festive ‘kraaak’ of a nutcracker breaks the restful silence. This bird’s humble appearance, a muted pattern of gray, black, and white, masks a master.

The Clark’s Nutcracker’s throat bulges, full of pine nuts, harvested miles away in the valley. Fall is slower to arrive there, and pine nuts are in ample supply. However, even these havens will soon be scarce. The nutcracker jerks his head left, then right. Confident in his solitude, and taking note of his exact coordinates, he swipes his beak through the soil. One at a time, the nutcracker coughs each seed into the newly dug trench, then carefully covers his cache.

Months later, he may return. However this is not his only buried treasure. This master of memory has been hard at work since the snows first melted. This cache is one of thousands of secrets known only to him, hidden in the woods, ready for winter.

Whack! The shearing of brittle pine echoes. A split log rests on a bed of freshly fallen aspen leaves. The scent of pine wafts through the grove, down the ravine, and under the fallen fir. A final scent as the fat bear cub drifts into hibernation. The nutcracker stands still, guarding his winter feast, startled by the foreign sound.

The freshly split pine marks a final addition to a final chord of wood, one of many, ready for winter.

Nathan Boyer-Rechlin is the Community Outreach & Backcountry Programs Coordinator at Walking Mountains Science Center. He loves experiencing the changing seasons out on the trail and finding connections in nature.