The Wright Brothers Had Birds on the Brain 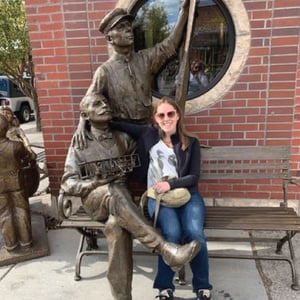 The month of December features some pretty notable holidays, but one that is often overlooked is National Wright Brothers Day, coming up on the 17th. This day of national observation commemorates the first successful flight of a mechanically-propelled airplane. This massively important day forever changed human travel, pioneered the space industry, and the way that we experience the world in general. It was also the first modern example of biomimicry, or looking to nature to find the solution to a problem.

The term biomimicry was popularized in the late 1990s, and is defined by the Biomimicry Institute as “an approach to innovation that seeks sustainable solutions to human challenges by emulating nature’s time-tested patterns and strategies.” Essentially, it is acknowledging that humans have the same basic problems as other living things, and that solutions to these problems probably already exist.

Like many dreamers and innovators before them, the Wright Brothers envied birds for their ability to soar. Orville and Wilbur were avid birders and studied ornithology texts. They also studied the efforts and mistakes of their predecessors, such as Leonardo da Vinci, who mimicked birds more literally by designing flight machines with flapping wings. The Wright Brothers also learned from their contemporary, Otto Lilienthal, who studied soaring birds such as turkey vultures and hawks, and the slight motions that enable them to stay aloft without flapping. Their own careful observations led them to the concept of “wing warping,” that roll control and other maneuvering ability can be attained by changing the shape of a portion of the airplane’s wing. Soaring and gliding birds maintain lateral balance by adjusting the tips of their wing feathers. A series of cables was used for wing warping on the successful 1903 flyer in Kitty Hawk.

Today, birds are still inspiring innovators to improve mechanized flight to make it safer and more energy efficient. For example, some airplanes now have electronic sensors in their noses to sense wind gusts and have their wing angles respond before the gust hits, just as many seabirds have with their beaks. Drones have even been designed after hummingbirds, hovering and zipping so fast that the real, live versions chased them in trials.

Biomimicry research expands far beyond aeronautics, into areas such as solar panels, architecture, nanotechnology, and medicine. Water beading on lotuses and many plants led to the creation of an exterior paint with bumps that use rain to collect and rinse away dirt. Humpback whale fins inspired more efficient and quiet wind turbines. A Kingfisher’s long beak inspired the shape of a bullet train that doesn’t create sonic booms when it travels, and of course many of us know that burrs inspired the hook-and-loop system of Velcro.

The world’s next major innovations are likely to be inspired by nature, and may seem as simple and elegant as the Wright Brothers’ notion to imitate soaring birds. What could your own observations of nature lead you to discover?

Hannah Rumble is the Community Programs Director at Walking Mountains Science Center and would like to share the disclaimer that she is in fact a cousin of the Wright Brothers and is therefore partial to their genius.