Fun with Foxes on Valentine’s Day 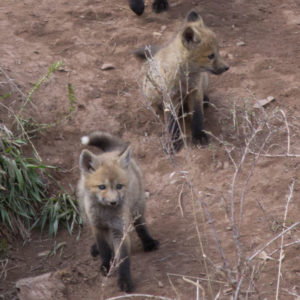 I want to take you home
I won’t do you no harm, no
You’ve got to be all mine, all mine
Ooh, foxy lady – Jimi Hendrix

Love is in the air, and not just in the human world. While we busy ourselves with buying chocolate hearts and long-stemmed roses, as usual, the natural world beats us to the punch. The month of February might seem full of cold winds and long nights, but there are actually several species who are doing more than just exchanging paper hearts this time of year. Animals such as foxes, coyotes, and great horned owls are all getting ready to mate right about now. And when we think about these three animals, they all have some really strong personification – the wise old owl, the sneaky coyote, and the sly fox with his sexy vixen. (To learn more about the mating habits of these other winter breeders, check out the Curious Nature archives!)

The idea of the sexy vixen and the foxy lady are both good imagery for this time of year. Because, let’s face it, Valentine’s Day might be about romance, but we all know where that’s supposed to lead. And for foxes, the research actually shows some interesting courting and mating habits, which vary within the different species of foxes. Originally, it was thought that foxes were monogamous, as males were often observed taking care of their families. But more recent research using DNA to map lineages has shown that most foxes (but especially those red foxes) are anything but monogamous. In fact, it’s common for females to mate with several different males in a season and for males to move beyond their home territory to mate with other females.

The specifics of fox courtship vary by species, but male and female foxes generally hunt and play together for 2-3 weeks before mating, which is typically accompanied by loud barking, yips, and screams. A short 52 days later, anywhere from three to nine kits are born, although litters can run as large as fifteen for Arctic foxes! Males generally help in caring for the kits, bringing food for the family and teaching the youngsters to hunt.

Valentine’s Day may be fun for us humans, but the mating game is no game for wild animals like foxes. Some estimates put the survival rate for foxes making it to their first birthday at less than 50%, and the rates are similar for most wild animals. And so the instinct to mate in wild animals is one of survival. In the evolutionary race, it’s not the individual that matters, but their genes. Genes define the population, making a red fox a red fox and a chicken a chicken. And each time a species mates, they shake the evolutionary Yahtzee dice, creating a completely randomized combination of traits that the parents hope will endow their youth with the secrets to survival, ensuring the perpetuation of their genes and their species.

With the human population inching past 7 billion, there’s little fear that the human race will go extinct from a lack of reproduction, so courtship and mating don’t have that same primal survival urge that we see in the animal world. But a few thousand years of pretending to be civilized can’t erase tens of thousands of years of natural selection, so those primal urges haven’t gone away. And while it’s important to be civilized (and consenting!), maybe giving into those primal urges once in a while isn’t such a bad thing.

Jaymee Squires is the Director of Graduate Programs at Walking Mountains Science Center in Avon. Jaymee has always been a fan of our local foxes, and she especially appreciates any opportunity to watch these agile critters pouncing in the snow.