Bristlecone pine trees, resilient to all but climate change 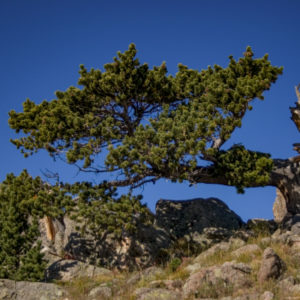 Winter continues to hold us fast in its embrace. Some of us may be looking forward to the coming spring when days get longer and the alpine releases much of its snow, but for some members of our environment, the long cold keeps them strong. One we might not readily think of at this time of year is the bristlecone pine tree.

Bristlecone pines are resilient; they have to be in order to live so long. A major factor of the bristlecone’s resilience is its extremely slow growth rate. These trees grow so slowly because of the harsh environmental conditions of their growing regions, including cold temperatures, dry soils, high winds, and short growing seasons. Where these conditions exist, such as at higher elevations close to where trees cannot grow (“treeline”), the trees grow dense wood that is resistant to infection. The wood is often too dense to allow fungal spores, insects, and other would-be parasites to get into the trees, allowing bristlecones to reach such a fantastic age.

However, even these incredibly resistant trees are succumbing to the current changes in our global climate. In an article published in the Proceedings of the National Academy of Sciences in 2009, researchers found that Great Basin bristlecones are growing faster these days. The researchers studied bristlecones growing near treeline in three different sites across western North America, and they concluded that this increased growth rate is due to increases in temperature. Put another way, this trend of longer growing seasons (warmer temperatures that last longer) at higher elevations is what allows the trees to grow faster. When we consider that slower growth means more resilient wood, then we realize that warmer temperatures can lead to weaker trees. Furthermore, they noted that the bristlecones have been growing faster in the last half of the twentieth century than during any other 50-year period in the last 3,700 years. Even some of our longest-lived trees will hardly withstand the pressures of human-caused climate change.

One way that our beloved bristlecones are poised for maintaining their place in our world is by growing in places that are too difficult for other plants to survive in. Growing in these places reduces competition. Bristlecones don’t compete well in places where lots of other plants can grow, such as places with long growing seasons, good soils and drainage, and sufficient water availability. In competitive places such as these, the bristlecones will grow in isolated groves, living near each other in a supportive community.

In times of stress, when it seems like everyone is trying to outcompete each other, perhaps we can learn from these amazing trees and focus on supporting the community that we still have. We can appreciate that harsh growing conditions won’t stop the bristlecones from slow and steady growth, nor will harsh conditions stop us. As Ernest Hemingway wrote, “The world breaks everyone, and afterward, many are strong at the broken places.”

Nicholas Scarborough is a Foley Graduate Fellow and Educator for Walking Mountains Science Center, working toward his MA in Science Education. In addition to working with children, he also loves to paint, write, hike, and ski. You can find more of his writings about nature and art in his personal blog, The Art Outside, at http://theartoutside.wordpress.com.