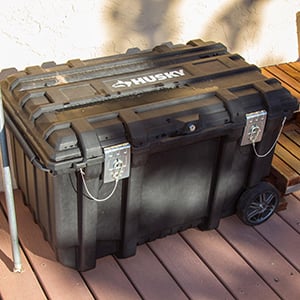 Right now it seems like the snow will never end, but spring is just around the corner. If you are like me, then you cannot wait to dig out your hiking boots and hit the trails when the snow melts. We humans are not the only animals that feel this way. Bears will also soon be exiting their dens and these hungry hibernators will be looking for food.

In Colorado most bears are active mid-March through the beginning of November. With increasing development and recreation, it is up to us to take the necessary steps to prevent human-bear conflicts. The good news is that black bears, the only bear species in Colorado, are naturally shy and wary of humans and unfamiliar things. Belying its name, Black is a species of bear and not a color. In Colorado, black bears can be black, brown, cinnamon red, or even blonde. Because of their thick fur coats, black bears can look large but male black bears average 275 lbs. and females average 175 lbs. Their natural reaction to a perceived threat is to run away or climb a tree. However, their search for food can alter their normal behavior.

Most bears spend the entire winter without eating or drinking. When they wake up from hibernation and emerge from their dens in the spring, food can be scarce. For black bears, more than 90 percent of their natural diet consists of grasses, berries, nuts, fruits, and plants. But in our high country environment, many trees, shrubs, and grasses are not leafing when bears first emerge. With noses 100 times more sensitive than ours, black bears can smell food from up to five miles away. Sometimes their keen sense of smell leads them to human food. As mentioned previously, black bears are wary of humans and unfamiliar things. However, if a bear finds food around homes or campgrounds, they can lose their natural wariness of humans. Bears are also very smart and have good memories. If they find food at a particular location, they will likely return in hopes of finding more. And though not naturally aggressive, a bear could injure people who get in their way of a meal. But have no fear, there are steps you can take to keep bears from getting into your food and to help you avoid human-bear conflicts.

The majority of human-bear conflicts stem from easy access for bears to human food, garbage, pet food, bird seed, and similar items. At home, be sure to have bear-proof trash and recycle bins. But even if you have bear-proof containers, do not leave them out overnight. Rather, wait and put them out the morning of your trash and recycling collection. Cleaning out your containers regularly can also keep a strong scent from building up and attracting bears. Similarly, keep all doors and windows accessible to bears closed and locked. Because bird seed is close to a bear’s natural diet, it can be one of the first things that attracts bears to human areas. Never store bird seed outside or in a place like a shed or garage where bears can get to it. Colorado Parks and Wildlife even recommends not putting out bird feeders while bears are active.

If you are on the trail, store food, beverages, and trash in airtight containers. If you are camping near a vehicle, lock all food and trash items in the car. Though bears will usually smell or hear you before you see them, if you do encounter a black bear, back away slowly and talk in a normal voice. Put your arms up and out to make yourself look big. Do not scream or run and avoid eye contact. Bears are fascinating animals that are part of what makes Colorado’s wilderness such a special place. Make sure you are taking steps to protect these beautiful animals and to keep them wild.

Ford Sanger is a naturalist at Walking Mountains Science Center in Avon. Stop by to learn more about bears and other wildlife during our free daily nature walks.

Born and raised in Nashville, Tennessee, Ford first came to colorful Colorado for college and to strengthen his relationship with the environment. A graduate of the University of Denver, Ford received his Bachelor’s degree in geography with minors in sustainability and international studies. During his time in college Ford participated in a wide range of extracurricular activities as well as international research and travel programs in places like Tanzania, India, Nicaragua, and Mexico.