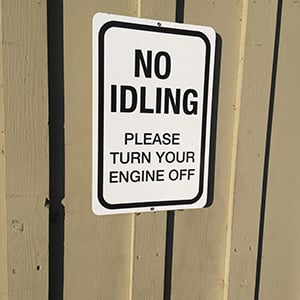 – Lyrics from Air from the musical Hair

We all live in the mountains for our own reasons. For some, it’s the scenic beauty and picturesque landscapes dotted with flora and fauna of all kinds. For others, it’s the ever expanding opportunities for recreation, from the mild to the most extreme. But regardless of why you live here, you can’t beat the fresh air. I admit that I sometimes take this for granted, but when I drive down to the big city, where you can see the layer of brown air that envelops the masses there, I am reminded to be grateful for the fresh, pure air that we enjoy in our mountain paradise.

And in the name of preserving this fresh air, there are a few common misunderstandings that are worth taking the time to clear up. It might not seem like a big deal when you leave your car running for a few extra minutes, but when you combine the impact of lots of cars sitting, often at the same location, the numbers add up. But what is adding up exactly? What is coming out of our car tailpipes and how do these chemicals impact our health?

Our cars burn hydrocarbons, which in theory, should only produce water and carbon dioxide when burned. But in reality, the hydrocarbons we burn in our cars contain a variety of differently structured hydrocarbons that burn at different rates and different efficiencies. This results in the release of numerous additional chemicals, including carbon dioxide, carbon monoxide, nitrogen oxides, sulfur dioxides, hydrocarbons, benzene, and particulate matter (soot). These compounds are released in various amounts, depending on the particular fuel source and the engine’s efficiency, and they have a range of adverse health effects, including reduced lung function, aggravation of asthma, and a range of other respiratory problems, from mild to severe. Carbon monoxide is particularly lethal at high concentrations, and benzene (which is released only in small quantities) is highly toxic and a known carcinogen linked with leukemia.

But there’s good news, right? Because these chemicals all just dissipate into the air, right? Somewhat. The chemicals do disperse as they are released from your car, but there’s another phenomenon that happens on both small and large scales, particularly in the mountains, and these are known as thermal inversions. A thermal inversion is when air close to the ground is cooled, often during cold winter nights, becoming colder than the air above and creating a layer of very stable air close to the surface of the Earth. This means that the exhaust fumes from your car combine with the exhaust from all those other cars creating a big cloud of toxic chemicals that becomes trapped close to the Earth’s surface, right where we live and breathe.

There are a few quick rules to reduce the dangers from idling cars. First, if you are going to be stopped more than 10 seconds, turn your car off. The gas required to restart your car is less than that needed for 10 seconds of idling. Second, warm your car up by running it. Your car’s interior will warm more efficiently and today’s modern engines just don’t need to idle more than 30 seconds before running. And sitting in an idling car can be particularly dangerous to your health, as the fumes from outside can seep inside the car when it’s not moving.

If we all work together, we can make a difference. So my plea for you today, is for you to help keep our mountain air clear and clean. Turn off your car when you’re not moving, and let’s clear the air!

Jaymee Squires is the Director of Graduate Programs at Walking Mountains Science Center in Avon. Jaymee loves her mountain home and feels very fortunate that she gets to spend her days working to care for it.