Fireworks of a Different Kind 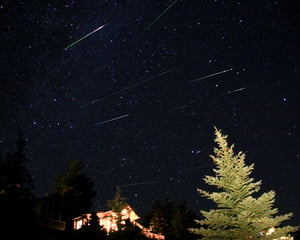 As we prepare to watch manmade fireworks light up the skies in the upcoming nights, there’s another fireworks show coming up that we might not be thinking about. And today, June 30, happens to be a special day just for these unique, natural fireworks, more commonly known as meteor showers. So on National Meteor Watch Day, it seems appropriate to recognize the upcoming summer pyrotechnics beyond those that we launch for July 4.

The first two showers this summer are smaller and generally lesser well known. Beginning on July 3 and lasting all the way to August 15, the alpha Capricornids will peak around July 30. This fairly weak meteor shower usually produces less than five meteors per hour, but it is notable for the number of extremely bright fireballs it can produce. The other small summer shower, the Southern delta Aquariids, lasts from July 12 to August 23, with a peak predicted for July 29-30. Generally faint in the northern hemisphere, this shower is known for producing high numbers of meteors that are generally faint and tend to lack persistent trails or fireballs. Both of these showers, however, will peak when the moon will only be 6% full, making conditions almost ideal for viewing meteors.

But perhaps the most famous of the summer showers is the Perseids, which radiate from the prominent constellation of Perseus the hero. Active from July 17 to August 26, and peaking on August 12 or 13, this shower boasts rates of 50-75 meteors per hour at times! The meteors derive from particles released from comet 109P/Swift-Tuttle during its numerous loops through the inner solar system. Unfortunately, the moon will be almost completely full during the peak for this shower, making it difficult to actually view the meteors against the backdrop of a moon that will be 94% full.

July 4th fireworks are great. They come in all kinds of colors, shapes, and sizes, and some of the local shows are truly phenomenal works of artistry and precision. But there’s something even more awe-inspiring about seeing a real meteor shower, with spontaneous bursts of light shooting across the sky at completely random moments. Even when I know they’re coming and I’m looking for them, there’s something almost magical about those moments when you actually spot one streaking across the sky. And that flash is so quick, so temporal and fleeting, that it’s gone before you know it and you are just left with that brilliance imprinted in your memory. Sometimes I even wonder whether I really did see it as the other members of my group spin their heads wildly, trying to catch the same scene. But usually, it’s already gone, and it’s as if that single blast of illuminated energy shooting through the sky was just for me, my own private fireworks show.

If you want to enjoy your own private fireworks show this summer, plant yourself outside, ideally after midnight, during any of the peak meteor shower nights listed above. The atmosphere might not be as festive as that on July 4, but there’s plenty to celebrate as you enjoy the celestial fireworks brought to you courtesy of the cosmos. Enjoy.

Jaymee Squires is the Director of Graduate Programs at Walking Mountains Science Center. Jaymee loves to watch meteor showers from the comfort of her sleeping bag and favorite lawn chair, but always finds it hard to stay up late enough to watch them!