If You Grow It 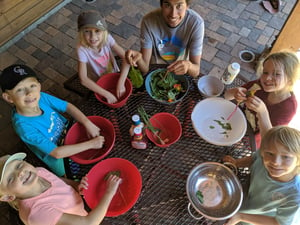 Once a week on a (hopefully) sunny afternoon, the students at the elementary schools in Eagle, Colorado get the chance to take a break from the normal schoolday routine. Leaving the clean and artificially lit environment of their classrooms, they step into a world ruled by nature. In this world, it’s okay to get a little on the messy side, play with poop, find a pet worm, eat something you found on the ground, or just sit and watch the leaves blow in the wind. This world is known as a learning garden.

Learning gardens allow everyone who steps into them to see the world in a slightly different light, whether by witnessing tiny epic battles between aphids and ladybug larvae, learning how many living organisms exist in a handful of healthy soil, or tasting something you wouldn’t ordinarily put on your plate simply because you were the one who planted its seed. Sowing Seeds, the school garden program managed by Walking Mountains, has existed in the valley for about seven years. While school gardens may seem like a new trend, the concepts behind garden-based education have been in use for hundreds of years. Follow along to see how this “tale as old as thyme” became the chic new face of experiential education.

Back in the seventeenth century, education philosophers were already advocating for school gardens. Czech philosopher John Amos Comenius, one of the earliest champions of universal education, stated, “A school garden should be connected with every school, where children can have the opportunity for leisurely gazing upon trees, flowers, and herbs, and are taught to appreciate them.” Maria Montessori, known for developing the Montessori method of education, believed that incorporating garden-based learning would expand children’s connection to nature as well as empathy for all living things. Around Montessori’s time, Prussia developed a compulsory school system that included school gardens, even creating a law that enforced the existence of school gardens.

Despite its progressive reputation, the U.S. didn’t join the school garden trend until around 1891, when the first teaching garden was developed based on the European model at George Putnam School in Roxbury, Massachusetts. By 1918, every state had at least one school garden. This surge was due to increased demand for food production during WWI. Learning gardens seemed to fall out of style in peacetime, despite a small comeback alongside Victory Gardens in WWII. It wasn’t until the last decade or so that the modern push for school gardens began to bring a little green back into our student’s lives.

Today, in a world of standardized testing, squeezing in a chance to get children’s hands in the dirt may seem like a waste of valuable classroom time. However, as the movement picks up speed and the Internet creates a network of curricula, resources, and support, educators are finding more and more ways to work academic standards like the Next Generation Science Standards (NGSS) and Common Core into garden-based lesson plans. Students in Sowing Seeds use the gardens to learn NGSS concepts such as life cycles, photosynthesis, decomposition, and ecosystem dynamics, all under the disguise of digging, planting, observing, and playing games. Finally, like a beautiful home-grown cherry on top, in school garden taste tests I can guarantee with all but the pickiest eaters that if you grow it, they’ll say yum.

My hope for the future of garden-based learning is that it will change what we mean when we talk about sending children to school, so that someday they’ll be able to put food on the table.