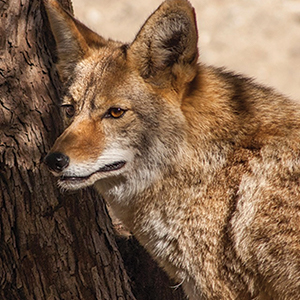 Wile E. Coyote may be famous for his many blunders and failed attempts to catch the Road Runner, but his actions in Looney Tunes do not quite represent those of his real-life counterparts. While the cartoon coyote is often outwitted, coyotes in the wild are intelligent and highly adaptable.

Typically, “wild” is associated with the wilderness and areas off the beaten path, but in addition to their rural habitats, wild coyotes have adapted to living in urban environments and now inhabit nearly every large city in the United States. Because coyotes prefer forested habitats and areas where they can avoid humans, many urban coyotes will inhabit green spaces in cities that mimic rural habitats, such as large parks and golf courses. However, urban coyotes are also capable of making patchwork territories by creatively weaving together smaller green spaces, including small parks and backyards.

Habitat is not the only aspect of coyote life that is highly variable. Coyotes show a wide range of behaviors, too. While coyotes are often observed traveling solo by humans, they do not spend their entire lives in solitude. Coyotes are highly social animals that live in packs that vary in size, but can be as large as 5 to 6 adults and their pups. Nevertheless, many coyotes can and do spend portions of their lives as solitary animals, but these tend to be youngsters searching for new territories, packs, or mates.

When coyotes do find mates, they mate for life. Their fidelity has been shown to give them an important competitive edge: females with more available food and faithful mates are able to get the help they need to produce and raise larger litters of pups with higher rates of survival. Thus, high rates of fidelity benefit not only the pair and their pups, but also the pack and population as a whole.

While coyotes tend to be steadfast lovers, they are much more flexible in other areas of life. Just as coyotes are adapted to many habitats, they are capable of switching between daytime, nighttime, dawn, and dusk activity in order to avoid humans and other species they fear. Coyotes are opportunistic omnivores as well, meaning they will eat any combination of fruits, vegetables, and animal prey available to them. In urban habitats, the coyote diet may include garbage and domesticated animals. However, studies have shown that urban coyotes most often stick to their natural diets.

With coyotes adapting to and thriving in more and more urban environments, the likelihood that we (or our pets) will encounter a coyote continues to grow. While most coyotes will avoid us, some may seem to “stalk” us when they are actually trying to escort us out of their territories, while others may act aggressively if feeling threatened. Thus, it is important to know how to protect ourselves and our pets from a potentially bad interaction with a coyote, and there are a number of ways we can stay safe:

Wild coyotes in urban and rural spaces are a lot wilier than the cartoon Wile E. Coyote, and by learning about their intelligence and adaptability, we can best understand how to protect ourselves, our pets, and the coyotes.