Decomposition is Just the Start 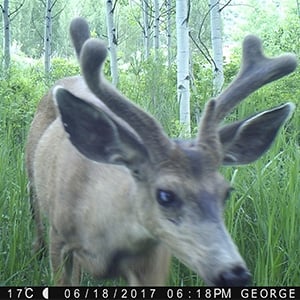 The arrival of September comes with a shifting in coloration of the aspen tree leaves from light green to a blaze of golden light. The soft rustling of the leaves and the sweet aroma of aspen dust fills the air. Beyond attracting the leaf peepers to the valley, these trees also increase the health of the soil as they grow and drop their leaves to decompose, simultaneously attracting a variety of plants and animals to the area.

Aspen tree leaves decompose in a different way than conifer tree needles, which connects to how quickly nutrients are recycled back to the soil. Leaves of aspen trees decompose rapidly because they are low in tannins and resins. As a contrast, conifer trees around the area such as lodgepole pine, blue spruce, and Douglas fir have needles that can take up to five years to completely decompose in a forest ecosystem. This is five years of these nutrients being stuck in the needles and not transitioning to the soil. So as an aspen stand matures, the soil quality of the area increases each year as the trees drop their annual crop of leaves. As the leaves decompose, they increase the organic carbon content and the moisture retaining capacity of the soil, which are important in creating rich soil that can support a diversity of other tree and shrub species.

This rich biota then provides for the many species that feed in the aspen groves. The twigs, bark, and buds of aspen trees are browsed by many mammals, and the seeds and buds are considered rich sources of energy for birds as well. At the Avon campus of Walking Mountains Science Center located along Buck Creek, wildlife in the aspen groves has been tracked by wildlife cameras over the years. Since setting up the cameras a few years ago, animals such as mule deer, black bear, raccoons, pine martens and long-tailed weasels have been spotted visiting the area.

Black bears claw marks on an aspen tree near the nature trail is not surprising as they are usually found in scrubland, aspen, and lower subalpine forests where berry shrubs are most plentiful. From late July until start of torpor, bears must eat 11-18 pounds of food a day, up to 20 hours every day and they gain an average of 1.5 lbs a day in order to prepare for the winter without food. Another animal sighted that is common above the rich soil of the aspen forests is the mule deer. During winter, their diet will include twigs of the Douglas fir, aspen, willow, dogwood, juniper, and sage. They also will rub their head against the aspen trees to take the velvet off their antlers and when they shed them in the winter.

The rich soil that is created from the aspen groove can also support conifer trees which, depending on the soil type, might outcompete them and take over. Aspen trees are known as aggressive pioneer species as they do not tolerate shady areas, and they readily colonize burned areas and can persist even when subjected to frequent fires. Conifer trees, on the other hand, need shaded areas (such as aspen groves) in order to start growing. If you have seen tree nurseries under shaded cloth, this is because many non-pioneer species need a shaded environment to mature in. A stable aspen community is characterized by an uneven age structure and the absence of more shade tolerant trees.

So this fall, as you pass through a shimmering stand of aspen trees, or see a jaw dropping array of fall colors from across a valley, you can think not just about the beauty of the trees, but also of the other plants and animals attracted to these same groves, but for different reasons.